Bullets fly in residential cul-de-sac, home to many families with children. 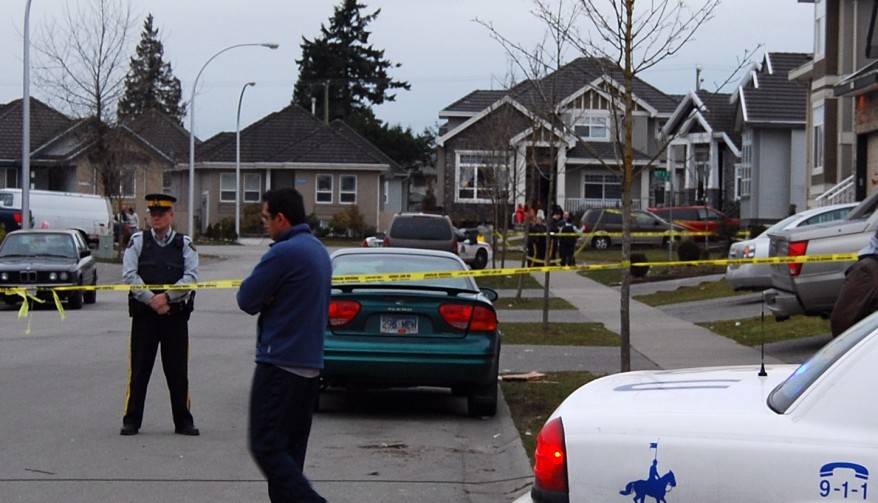 Sometimes I think I know what it must have been like in Vietnam…. the steady chopchopchop sound of the rotors overhead, the shouts, the wails of sirens and stench of fresh blood and acrid fear filling the air…

Only I live in Surrey, and the chopper overhead isn’t a med-evac unit, it’s RCMP Air 1.  The shouts aren’t a soldiers but those of neighbours screaming … and the blood?

It belongs to some guy lying in a driveway who’s just been shot.

That was the scene again this evening in Newton, at 127th street and 67th avenue  just around dinner time when I  again grabbed my camera and ran after hearing the helicopter overhead. Reports of gunshots fired just a few blocks away soon led to me to the location where police had already taped off the area .

One man has been shot and critically injured, and his bloody clothing still lay in the driveway now, neighbours say. Police have confirmed he was taken to Royal Columbian Hospital for treatment.

The investigation continues on the scene in Surrey

The area around the shooting is known to locals as being a hot-bed of drug-related activity, and there have been several shootings in the vicinity in the last few weeks, that are leaving locals like myself, on edge.

And if I read things right, things are about to get worse for those of us living in what we call  ” the war zone”, because while Mayor Watts was being given a standing ovation for her economic stimulus plan for the city of Surrey, Delta Police announced plans of their own.

The Surrey Leader is reporting that  Delta police  are undertaking a radical and ” in your face” campaign to rid the city of gangsters.

” Officers are visiting the homes of residents with gang connections, checking those on parole to make sure they are meeting their release conditions and otherwise making sure they know police are watching them.

“We want to make it uncomfortable for these guys”, Sidhu said.

“We want to keep the pressure on, to say ‘you guys are not welcome here’.”

The goal is to get them to move somewhere else.

Sidhu called it a “displacement strategy” that all Lower Mainland police should adopt.

“If we each take care of our own house, these guys are not going to have places to go.”

“ Kennett predicted the program will produce a drop in crime, but at the expense of longer hours for officers, because it will require groups of police to evict groups of gangsters.

“ These guys are likely to have guns, likely to cause violence.”

It will also have the effect of driving gangsters from Delta establishments to neighbouring communities such as Surrey, White Rock and New Westminster.

“In essence, we’re sweeping our garbage across the road (if the other communities don’t run similar programs),” Kennett said. “

Now, perhaps the city might take notice here : the Sgt. said ” taking care of our own house”.

And what was our council up to this week? The mayor and RCMP signed a ” Community Impact Statement”-  as in this excerpt from The Surrey Leader:

” Last year, Surrey RCMP responded to almost 100 confirmed reports of gun fire, of which 33 people were hit with bullets and 10 of those were killed. During the year, police seized 324 firearms, including 102 handguns.

Those statistics will be delivered to the judge presiding over the next case in Surrey Provincial Court which involves a gun crime.

It’s a “Community Impact Statement,” signed by the mayor and Officer in Charge of the Surrey RCMP and is hoped to bring about more meaningful sentences for people involved in gun crimes. ”

( this is hilarious story if you ask me )- read the full version here : http://www.bclocalnews.com/surrey_area/surreyleader/news/41179099.html )

So where does this leave us? She doesn’t believe or support a regional police force. She thinks it is already one big happy family and its working fine, when clearly it is not .

The city is now going to be on the receiving end of a whole new load of gangsters who can’t hang out in Delta anymore. As if we didn’t have enough to worry about already.

I would suggest that she might get her head out of the sand and head over to Lois Jacksons office for a lesson in how to ” Git ‘er done.”

The editor of our own  Surrey Now newspaper  even said this in one of the first honest editorials to come from that paper about what it really is like in Surrey :

“If we’re honest with ourselves, not many of us would choose to raise our families in downtown Surrey.

I, for one, would not want my wife walking our children to school every day in Whalley – not the way things are right now.”

Well done Beau! For once, I feel like someone is listening , and the other residents who feel just like I do.

Last weekend, the Province ran their usual ” How I spend my sunday” special, featuring Dianne Watts.

She talked about relaxing in her hot tub in Cloverdale. She talked about eating brunch by the beach ( Crescent Beach or White Rock), and shopping in the little markets in South Surrey. Not that there is anything wrong with this, except it shows how far removed her life is from mine and anyone else who lives around here.

Our own Mayor does not do business,shop or play in Surrey proper.  Tonight’s shooting happened at 5: 30 pm, in a cul-de-sac where children often flood the road while playing, where women talk on the corners, where teens play street-hockey outside.

To say it is a miracle no one  innocent was hurt is an understatement.

Time for the mayor to take care of her own house, instead of waiting for the knight in shining armour to do it for her. 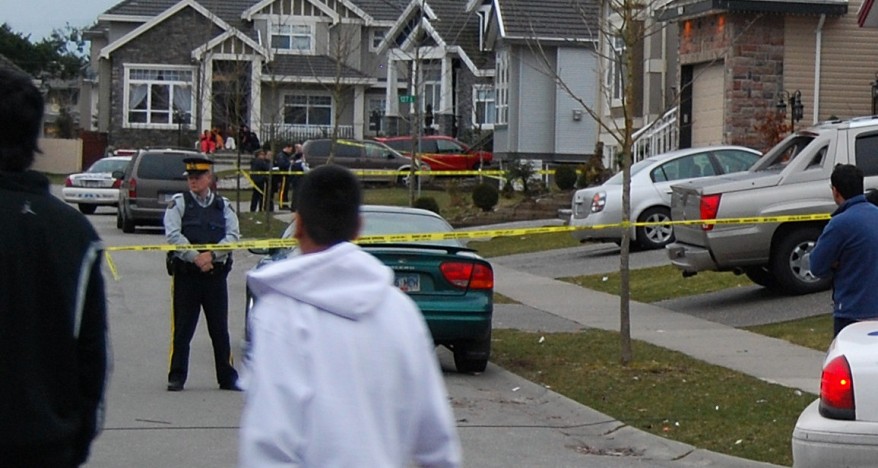