Part 2 of  the 4 part series currently being published online at The Legislature Raids is  a must read for this rainy weekend, so grab a hot drink and settle yourself down for a wild ride.

” BC  Premier’s Public/Private P3 Lifestyle “  is the latest of  installments that takes a  deeper look at the roles played by the media in manipulating what the public’s perception is of the premier and his Deputy Chief of Staff, Lara Dauphinee , pictured in this photo( credit to Patrick Tam, Flunging Pictures, who was so nice to allow me to buy and use two separate photos last year…)  : 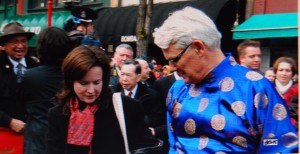 Lara’s official role with the premier is  a somewhat contentious one, dogged by lurid allegations and unanswered questions for years.

However, this installment brings yet another telling story about our premier,one that some would prefer to disappear forever – and this time,  from an anonymous poster in the comments section below the post: https://www.blogger.com/comment.g?blogID=27776136&postID=4285230520503754100&isPopup=true

Last week, a mysterious brown envelope arrived at the office of the Terminal City Weekly, an alternative newsweekly in Vancouver. It contained an article, written by Vancouver Sun veteran reporter Petti Fong, with an anonymous note attached.
“This is their newspaper article that the Vancouver Sun senior management, at the behest of publisher Dennis Skulsky, refused to publish because they thought it made Premier Gordon Campbell look bad,” read the note.

The article, which Fong confirmed was hers, quoted excerpts from an interview she conducted with a man who was in the drunk and when the Maui cops opened the door early in the morning of January 10, and told the drunken and disheveled Premier to make himself at home.

Fong opens her piece thus: “Premier Gordon Campbell swayed as he tried to find a place to rest and fell asleep quickly on a soiled mattress the night he was arrested, according to a petty criminal who shared his Maui jail cell.” According to Fong’s source, a 33-year-old male indentified as Frank Alconcel, Campbell was hosed.

Got your attention? I thought so. Now go read this, and everything else she has on The Legislature Raids.

6 thoughts on “” Campbell’s cellmate: The story The Sun wouldn’t publish””