I had a great chat with David Carrigg of the Province today, asking why Watts wasn’t pushed about always pushing the net cost of the new city hall, rather than the actual, total cost.Well, I also asked for equal opportunity for a live blog chat with Province readers, and we talked about a few other things as well. and this is the result. Running front page on the Province online right now : http://blogs.theprovince.com/2011/11/10/municipal-matters-nov-10-is-surrey-mayor-dianne-watts-losing-her-grip/

On Wednesday, The Province held an editorial board meeting with Surrey mayor Dianne Watts. Watts is a civic political powerhouse and excellent on her feet.

However. After two terms of power, resistance is rising in the form of seven opposing mayoral candidates, two of whom – businessman Ross Buchanan and developer Vikram Bajwa – are pushing hard.

I had a chat this morning with Buchanan’s flak Laila Yuile, who wanted to know if her candidate would also get an editorial board meeting and 30-minute live question and answer. The answer to that is no, as Watts is an established player who came from the trenches to become commander.

When Buchanan does the same, he will get an editorial board meeting.

Regardless, Buchanan’s flak raised some interesting points about the real cost of Surrey’s $100-million new city hall, densification, school crowding, the cost of RCMP and Surrey voter disconnect. She says voters feel alienated from city hall and that once the day crowd leaves Whalley’s City Central development the area goes to the dogs.

Here is a letter sent to Municipal Matters writer Kent Spencer from a Surrey resident that points to the disconnect.

Dear Kent
thank you for taking the time and courage to write your articles
I can see residents all over are not save from council and city bad planning.
There is street in Surrey.
In the neighbourhood of Newton, city installed parking meters. Many petitions and letter were send ,e mail,faxed to oppose the idea.
In this democratic country no one cared and result is empty street 72 A Ave and almost empty street 137 str.. Business on street suffer, owners start to move out and planning to do so or going to be bankrupt. SOON> The value of the busineeses is down, no one is coming for service,no one will buy it.
The businesses are here for 15 years, practically all service oriented=hair salon,UPS store .dry cleaner, coffee shop, specialty food stores,
sadly former patrons are leaving for other options  where is free parking, and I must say no one in vast neighbourhood has parking meters. So why will somebody spend extra if the same service can be found just cross the street for free.?????
PS
Please write about it,
Jana Feigl

In 2008, Watts got 51,423 votes compared to 8,465 for her sole opponent. This year, there are more opponents who will divide votes opposed to Watts, so she is still a shoe-in.

But her iron grip on city hall seems to be loosening. Imagine what would happen if more that 24.5 per cent of Surrey’s eligible voters showed up, as was the case in 2008?

Think about that. If there is one thing I know for certain, in these uncertain times, it is that the 99% are unhappy with the status quo, and they aren’t down at the Vancouver Art Gallery in tents. Tens of thousands of them live in Surrey. And they are tired of being left behind.

A reminder, to please come join us at the Violence forum this evening, details below! 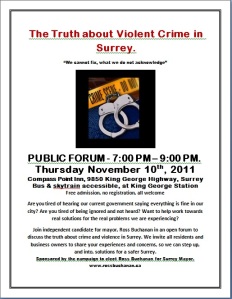 4 thoughts on “But her iron grip on city hall seems to be loosening. Imagine what would happen if more than 24.5 per cent of Surrey’s eligible voters showed up”