Originally posted February 27,2011, this little gem reveals waaaay too much information about our still unelected premier… so while I am working on a real story… please, read, shake your head, laugh and share with your friends. As Martha Stewart would say: “It’s a good thing.”

Christy Clark, new premier, ex-talk show host… and the woman who loves to find out “if you can fart in a bottle and save it for later.” – by watching MANswers

Yes, this is the person who is steering the ship now, my friends, read and weep-from the Vancouver Sun sport section:

Christy Clark doesn’t watch a lot of TV. But when she does, she wants quality. Which is why her favourite show at the moment is MANswers. ( http://www.spike.com/shows/manswers * warning explicit content on this site – LY) 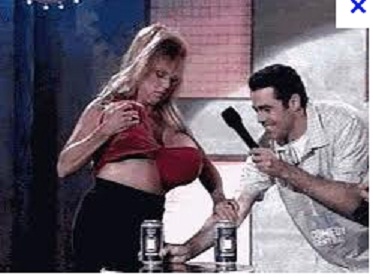 “You’ve never heard of it?” she said, somewhat astounded. “It’s on Spike TV.”

“‘How big do boobs have to be before they can crush a beer can? Stay tuned! MANswers, coming up next!’ Stuff like that.”

She laughs, then switches back to the deep voice. “‘Can you fart in a bottle and save it later for your friends?’ ‘Can poo save your life?’ Then they’ll go to commercial break, and it’s always in that voice. It’s totally tantalizing, you can’t wait to find out.

“Then they have some guy on who’s a gastroenterologist from Stanford or a physicist from Stanford, real people with real credentials and they’re on MANswers doing tests determining how large each breast would actually have to be in order to crush a beer can. And if it’s a Pabst Blue Ribbon beer can, does it crush quicker than something else?

There you have it folks. Christy Clark loves Manswers and you know that is going to secure a lot of votes in the He-man, frat boy, beer bong demographic.  Straight from the archives of the Sport Section. But you will have to click on the link to find out her other weird( ??) habit.http://www2.canada.com/vancouversun/news/archives/story.html?id=cf4a9a2c-f4ad-45f7-902b-99ada4aa15d8

13 thoughts on “Time for one from the Christy Clark archives…”