“It is about whether we live in a functioning democracy.. or want to.” ~ Andrew Coyne

“This isn’t about the planes, in other words, or costs, or accounting. This is about accountability. This is is about whether departments are answerable to their ministers, and whether ministers are answerable to Parliament — or whether billions of public dollars can be appropriated without the informed consent of either Parliament or the public. It is about whether ministers speak for their departments, or can disown them when it suits them. And it is about whether we, as citizens, are prepared to pay attention, and hold people in power to account when they lie to us.”

Read the entire column by Andrew Coyne in the National Post here: http://fullcomment.nationalpost.com/2012/04/11/andrew-coyne-auditor-generals-f-35-accounting-complaints-are-deja-vu-for-peter-mackay/ 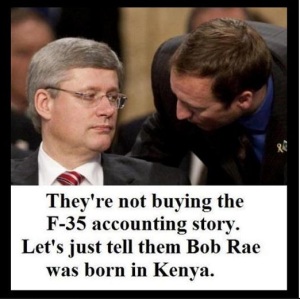 I’ll have a bit more on SNC later on, and please scroll down to digest and share the feature, Playing with the Dragon.

8 Comments on ““It is about whether we live in a functioning democracy.. or want to.” ~ Andrew Coyne”