In todays Times Columnist, Iain Hunter waxes on about the bum rap given to the still unelected Christy Clark by the media, women… and everyone else in B.C.

Hunter bemoans the fact that when a politician is in trouble.. anything and everything they do works against them. Go on, read and weep. Wah Wah. Cry for me Argentina. Suck it up, buttercup and hang on for the ride, which isn’t pretty.

Here’s the deal Hunter – let me give you a little insight into why political chameleon Clark can’t even risk making a wee joke, nor do any of us care to tolerate her any longer.

She is as fake as the Gucci handbags sold for $29.95 at flea markets all over Metro Vancouver. And like those handbags, while they look really good at first, when you put them to the test they fall apart like an old sock.

Most of us know that while she is a provincial liberal, she is also a federal liberal. So sucking up to the big man Harper with a Timmys in hand watching hockey with a finger in her dimple.. well.. it doesn’t even ring remotely sincere, or real.

Taking a trip down memory lane.. she resigned from the legislature before the BC Rail debacle hit the proverbial fan, stating she wanted time to spend with Hamish, dear child, and her family… and then shortly afterwards ran for mayor of Vancouver, unsuccessfully.

Despite the overwhelming evidence that the need to care for her child and family was the reason she left politics was false,she worked with her federal liberal wunderbar ex- hubbie  Mark at Burrard Communications until Kinsella allegedly bagged her a spot at CKNW.

Yes indeed, that kept her in the spotlight alright, until she set her sights back on larger fish… forget the people of BC, she had ambitions…Campbell went down in flames, she ran against the Falconater  for BC liberal leadership and won.. .and since then, the rest is an example of the worst political marketing strategy in history.

She’s a Filipina in her heart… ( I doubt she even knows what tocino or longaniza is, both staples to Filipino friends I love) … a south asian at Vaisakhi in traditional garb, a concerned citizen of BC, sweeping broken glass in a suit, low-cut top and high heels photo op following the Vancouver riots, ( does she know how a broom works? ) a conservative at the traditionally fed con fundraiser Beans and Jeans… and a wanna be pride participant when goaded.… dare I go on?

Honestly, if the Rover discovered aliens on Mars, I think at this point, Christy would be up there shaking hands and handing out cards with her name on them.

Oh yes. She does indeed make jokes about kicking all the men out at all female events, something many women find repugnant because it calls to sexism of a different sort. Go women, men suck has no place in 2011 and I am hardly the only one who thinks that.  Epic fail for Clark. Epic. More so than calling out her old colleagues and fans at CKNW at that same Beans and Jeans fundraiser… wow.. do you feel loved, appreciated? Get over it – you were nada but a stepping stone on the way to the premiers chair she has currently chained herself to like none before her.

Reality check Ms.Clark. Men aren’t all bad, but fakes – regardless of sex – are incredibly damaging to all politicians, indeed. And Clark is one of the biggest fakes, most obvious chameleons to grace B.C. in a very, very long time.

Please, I beg you Ms. Clark, give us an election on time. Give us a loyal conservative to hate, a dedicated socialist, an intrepid commie or even a weed smoking pot party candidate to examine.  At the very least, we can respect their honesty in their political leaning and presentation – unlike yourself.

As for Clark? She stands for anything and everything and is apparently loyal to nothing but her own blind ambition and power. The continued announcements of her caucus who won’t be running again support this statement. They don’t believe in her either.

I beg you, Iain Hunter, prove me wrong. 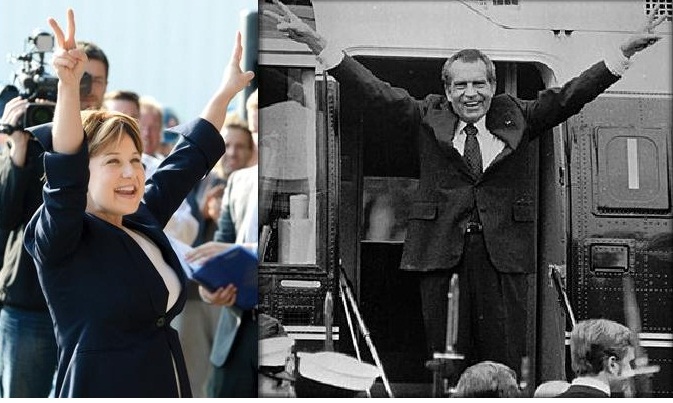