A B.C. Government For The People…Not At The Expense Of The People.

Today I couldn’t help but wonder… at what point in a politician’s life does spewing hypocritical crap become so second nature that they fail to smell the aroma of the barnyard they’re sitting in?

It was a mere two weeks ago when the story broke of excessive and frivolous spending in government, not only by the premier, but by all ministries.

The premier justified her spending, saying it was a once in a career instance as host of

several events, but failed to comment on the excessive and very questionable spending in other ministries, which included everything from Lululemon clothing to liquor and wine. Oyster dinners in the thousands? Cases of wine from vineyards? Yes! Simply the cost of doing business!

Despite substantial evidence to the contrary, the premier just released her second quarter infomercial this week in which she claims that her government has done a great job of ” keeping government spending down to keep taxes low for you.” I could barely keep the bile from rising in my throat! Seriously Ms. Clark? What planet are you on? Perhaps Mars with the rover mission, and suffering from oxygen deprivation? We all read the lists of items charged to government cards! What’s wrong with you? 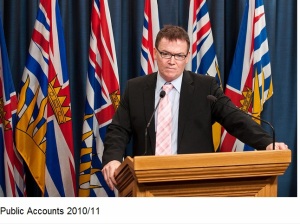 Another example of hypocrisy in action came last week. Finance Minister Kevin Falcon was crowing foul over the excessive spending on managers and perks over at ICBC, claiming the rest of the B.C. government has cut back, and so must ICBC.

The only problem is that one, it isn’t true the government has cut back spending, as I have just shown you, and two, documents released Tuesday by Integrity BC show anything but fiscal restraint.

As the result of a Freedom of Information Act request by the non-partisan organization Integrity BC, it was revealed that former chief electoral officer Craig James, spent more than $40,000 in four months. Those expenses included a trip to Nairobi, which included his wife.

When confronted by reporters, James defended the expenses, including his wife’s ticket, stating that all spending was in line with the policy of the day.

What stinks even more than his excessive travel expenses, was that James himself approved this policy when he took over the position. His successor reverted it back to the previous, more appropriate protocal. Yes that’s right, James himself made it possible to take spouses on government business when it was not required to do so — a policy change completely at odds with the rest of government.

What could possibly lead these politicians to make such claims of fiscal austerity when the evidence is all over the news to indicate otherwise? They must either think we are all completely daff, dumb and blind, or simply not give a damn.

I’ve written much about the air of entitlement this government has come to display, an attitude which sets an example from the top of government for all the levels below. How can one expect any government executive or bureacrat to display restraint when those in charge demonstrate a proclivity for excess?

The truth is the average person is British Columbia just doesn’t even listen to any of this bizarre hypocrisy anymore. The average person in this province is still struggling to make ends meet, evidenced by the amount of debt we carry. Whether or not it’s the most basic of needs such as food and shelter, or meeting mortgage and car payments, most people in this province are far removed from the reality of luxurious “vacations” oops I mean, conferences in Nairobi.

Falcon announced Wednesday he won’t be running in the next election, not a surprising

move for many like myself who have followed his actions in government for years. While he claimed loyalty to former premier Gordon Campbell and our currently, still un-elected Premier Christy Clark, we all know he could see the writing on the wall.

The Liberal ship is sinking and not running again is his only life raft capable of keeping a future political career afloat provincially or federally. With that decision, he effectively buttered his bread on both sides, in one stroke.

15 Comments on “A B.C. Government For The People…Not At The Expense Of The People.”