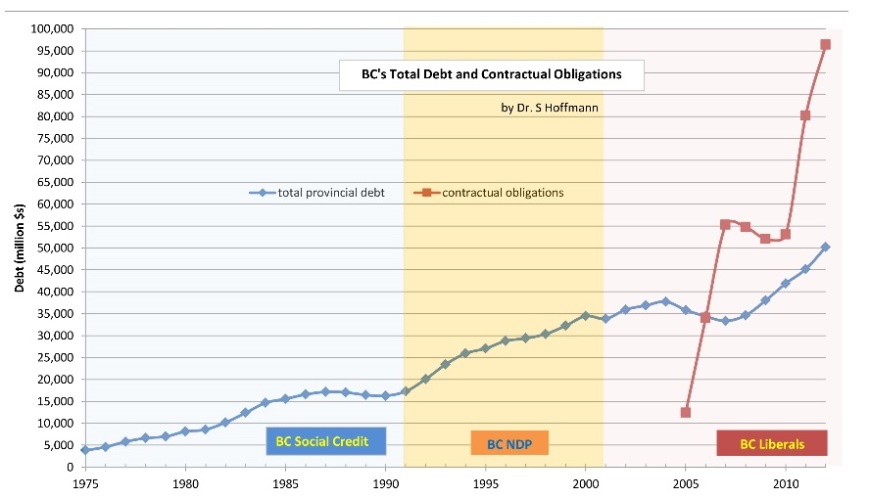 By now most of you will have heard of the soon to be departed premiers performance on CKNW this morning.

It was stunning. If I had to name that hour I would call it ” How not to lie your way out of a paper bag.”

Regardless, in a timely bit of serendipity, our friends retired economist Erik Andersen and Dr. Sandra Hoffman have one of the most important posts up today over at The Commonsense Canadian, and I strongly feel it should be read by every British Columbian.

The debt chart above, borrowed from their post, is about as graphic as it gets of a visual on what the Liberals real debt legacy is.. and it isn’t pretty.

It might be instructive to the citizens of BC to have a financial report card on their Provincial Government before casting their vote in the coming election.

A good starting point is the 2001 publication by Gordon Campbell and the BC Liberal Party titled “A Vision for Hope & Prosperity for the next Decade and beyond”. Ten “visions” were presented – numbers 9 and 10 are of particular interest:

9. The most open, accountable and democratic government in Canada.

10. Responsible, accountable management of your public resources and tax dollars.

And share this with everyone you know. In fact, I would suggest printing off this graphic chart on their site and share it as well, on bulletin boards, at work, with neighbours.

28 thoughts on ““BC Liberal Legacy: A Huge Debt Burden” ( aka, Christy Clark really has no clue what she is talking about)”