In recent weeks, the state of an aging railroad bridge that spans the Little Campbell River in South Surrey – owned and maintained by the U.S. based BNSF Railway – momentarily attracted the attention of the media after the horrific tragedy of Lac-Mégantic.

However, residents in the area have been concerned over the bridge for years, despite the fact BNSF claims the bridge is regularly inspected and completely safe to transport cargo. This line regularly carries hazardous cargo, including  anhydrous ammonia and chlorine,and travels through heavily populated residential and suburban areas. It would be an environmental and social disaster for any of those items to be released in a derailment with breached containers.

Recently, I met with Bill Brehl, President of the Teamsters Canada Rail Conference – Maintenance of Way Division and a member of  Transport Canada’s Advisory Council on Rail Safety (ACRS), and passed on the video and recent media coverage to him for review and his opinion.

The result was a return trip to BC for Bill and he felt concerned enough looking at the video and the coverage, that he took a look at the bridge personally.

The resulting photos tell a story that could potentially be a recipe for disaster. Numerous defects including holes corroded right through the web, support braces cracked right through or rotted fully, bridge seat bolts dissolved to nothing and no Jordan rail on the bridge at all. Jordan rails are the smaller rails that lie in between the large main rails on the track. They are essentially a safety feature – in the event a train car comes off the rails,the smaller rails inside the main track should keep the car from falling off of the bridge. 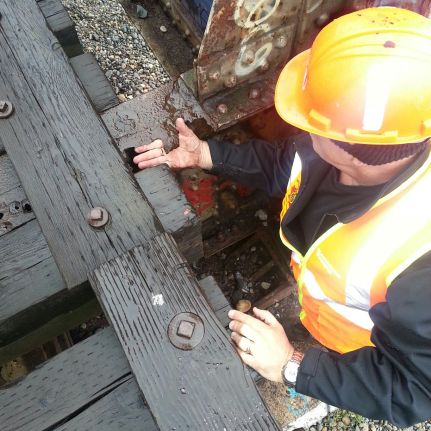 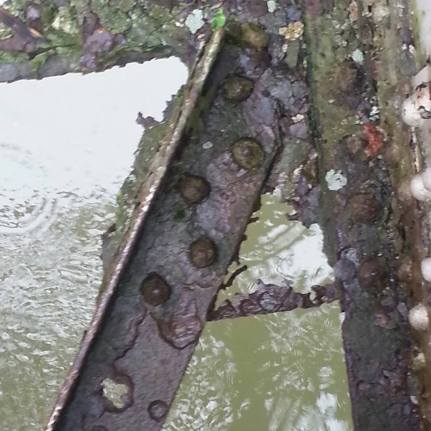 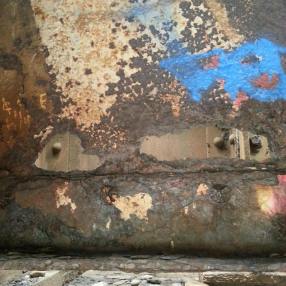 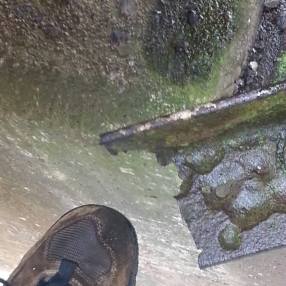 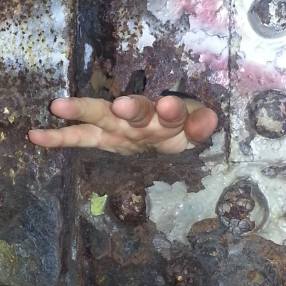 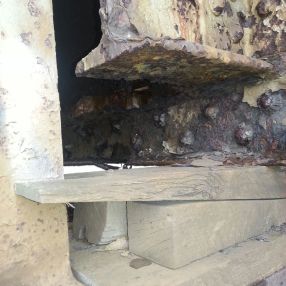 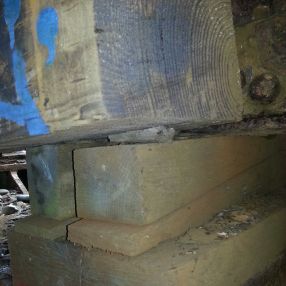 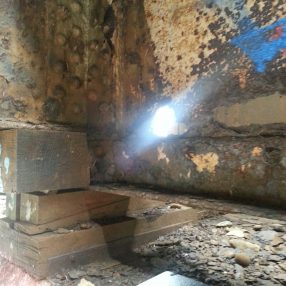 It’s in the public’s interest to point out that older structures that look to be in horrific shape, are often not. While a coating of rust might make a bridge look decrepit and faulty, most often than not, it doesn’t have any bearing or impact on the structural integrity of the bridge.

In this case however, the bridge in South Surrey is clearly in a condition to be replaced.

While BNSF  reps have stated the bridge is slated for replacement pending permits and permissions from local first Nations, the questions need to be asked about why this bridge has been left in this condition in the first place – and why no repairs have been done to date on the innumerable defects.

It brings to mind the collapse of the bridge in Calgary earlier this year. That bridge was deemed safe as well by CP Rail inspectors prior to the collapse, leading Calgary mayor Naheed Nenshi to question the inspections of CP. While it is understandable conditions underwater can change quickly with a change in current and flow of a river, the problems highlighted in these photos are not underwater and are clearly and easily seen and accessed.

The Burlington Northern Santa Fe Railway ( BNSF) is owned by one of the richest men in the world, Warren Buffett, via the company Berkshire Hathaway. While bridges are without a doubt the most expensive component of a rail line, they are also a crucial component and one that must be maintained adequately for obvious reasons.

Public safety, and safety of rail workers, must not be compromised. De-regulation at the hands of the Canadian government in the late 90’s effectively stripped rail transport safety from government oversight and gently placed it into the hands of private corporations.

Government regulations are created for a reason.They standardize an acceptable set of rules and guidelines to safeguard the public, the environment and workers. Not just for the rail industry, but in trucking, airline travel, food and drug production, to name just a few.

When governments cave into external pressures and budgetary concerns – real or contrived – and begin de-regulating industries that must maintain a high standard of safety oversight, it becomes a recipe for disaster.

Ironically, lobbyist records show that BNSF has been actively lobbying the B.C. provincial government since 2011, in one case, to “Inform government of BNSF procedures for transporting products in an environmentally responsible manner”. 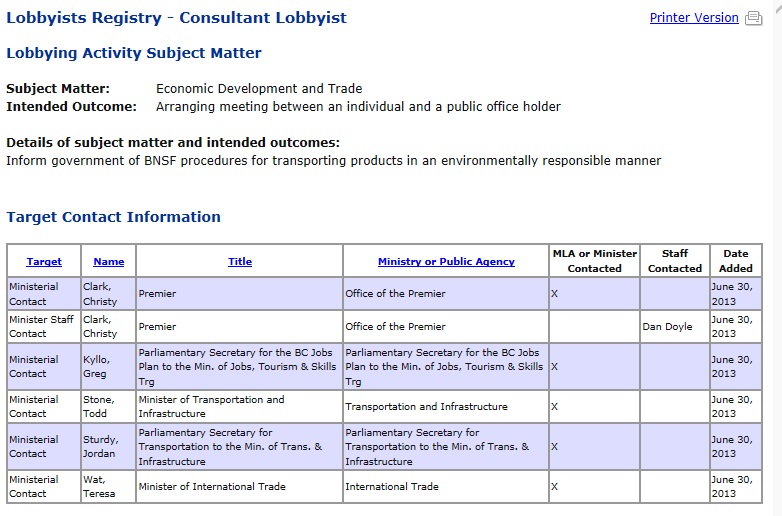 And where is new transportation minister Todd Stone on the state of this bridge? And perhaps our new premier, Christy Clark? Long standing public servant Dan Doyle?

Is the condition of this bridge indicative of transporting products in an environmentally responsible manner? In my opinion, no. And the province needs to take a hard look at what their values are when it comes to ensuring the safety of the public in our province.

“He said there is frustration among mayors and cities about a lack of municipal rights to inspect bridges owned by railway companies.

The rail bridge in Bonnybrook dropped more than 0.6 metres in 90 minutes following a ‘structural failure,’ according to the Calgary Emergency Management Agency. (City of Calgary )

“How is it that we don’t have regulatory powers over this, but it’s my guys risking their lives over this?” Nenshi said.

As tragic as Lac-Mégantic is,and will remain to be in Canadian history, now is the time to push beyond the pain and horror.

We must not only look at the core issues behind this accident, but what must be done immediately, to prevent such an accident from occurring again, in any other community – including South Surrey and White Rock. The safety of the public, the workers and the environment cannot be compromised. This bridge must be fixed or replaced now.

All levels of government across Canada must put partisan politics aside immediately and bring rail safety regulation back under government oversight.

To do anything less, would be far more tragic than Lac-Mégantic.