Every year the Canadian Association for Journalists hosts a conference, and this years program includes an incredible evening of discussion open to the general public: J-Fest, a celebration of journalism that matters!

The Times Colonist’s Lindsay Kines led investigations into Vancouver’s missing women, the death of toddler Sherry Charlie and the treatment of the developmentally disabled.

On Friday (May 9) at 7:00, these three journalists will talk about their work at J-Fest, a special event for the public organized by the Canadian Association of Journalists.

They’ll be talking about the importance of their work – and why Canadians should care about it.

Because we aren’t talking about that, who else will?

Tickets are $5 and can be purchased online (www.caj.ca) or at the door. 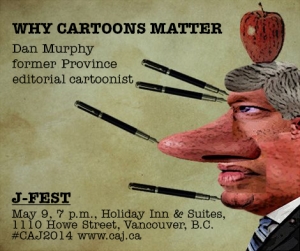