Breaking news by Dave White of News 1130 yesterday, after receiving a tip on a work order given to West Vancouver residents of work on a retaining wall:

A retaining wall in West Vancouver is causing problems.

A construction bulletin was sent by the province to people living on that road on April 8th, telling them soil anchors need to be installed, and a new-reinforced wall face needs to be constructed.

For people living in the area, this means no access to their homes for eight hours a day from this time next week until the end of September.

The Sea to Sky Highway was largely rebuilt by contractors Peter Kiewit and Sons for the Olympics, completed in 2009.

This is not the first retaining wall built by Kiewit on the South Coast that has needed repair. Back in 2011, a retaining wall in Coquitlam as part of the Highway One expansion had to be rebuilt.

It was April 30th, 2014 when I first broke the story of how troubling photos of 3 other retaining walls on the Sea to Sky highway,had prompted the Ministry of Transportation to re-inspect all of the walls: https://lailayuile.com/2014/04/30/troubling-photos-spark-ministry-of-transportation-inspections-of-sea-to-sky-retaining-walls-creating-new-concerns-over-kiewit-construction/

The Ministry of Transportation is investigating the condition of at least three MSE (Mechanically Stabilized Earth) retaining walls along the Sea to Sky Highway, according to sources close to the project.

This action finally comes after specific Ministry employee’s received the photos shown below – in February of this year – that show clear flaws, deficiencies and structural concerns that sources indicate out-of-spec walls. Major defects show large open gaps in the concrete panels, water seepage behind walls, walls that are “out of batter” ( leaning the wrong way) and possible vertical movement of the walls. *terminology link found here for reference.

In some areas, the gaps are so wide that the tongue and groove elements are no longer meshed and it is possible to reach in and feel the geotextile cloth behind. While the photos were taken earlier this year in a cold snap, follow-up visits during rainy weather have shown very little water coming out of installed drainage pipes installed for such purpose, and a build up of water behind the wall with seepage from under the wall in other areas.

The response from the Ministry at that time was that they had investigated all the walls, and that it was merely a cosmetic issue. The BCNDP did not comment at that time, although they were fully apprised of the situation.

In November of 2014, I followed up that post with another, with excerpts from emails indicating that Kiewit – the builder of the highway- had inspected their own work:

In May of this year ministry officials stated that they had inspected the walls following receipt of the photos.

However,email correspondence from a Ministry of Transportation operations manager in September of this year,indicated it was actually highway builder Kiewit, that had inspected and reviewed the walls:

“I am out of town at the moment but wanted to give you a quick update.  We just received some information from Peter Keiwett regarding the walls in Horseshoe Bay.

Their investigation and review did not note any changes or concerns with the walls.

We are reviewing what was submitted.”

I contacted the operations manager in question, “to confirm whether or not MOTH( ministry of transportation and highways) had reviewed the Kiewit inspections of the MSE( mechanically stabilized earth) retaining walls on the Sea to Sky, and what the findings were.
Has the ministry done their own inspection since the photos were taken?”

“Thank you for getting in touch with me on the status of the retaining walls built as part of the Sea to Sky project.  To answer your question, Yes our team have reviewed the correspondence/documentation and walls along the Upper Levels.

I’ll also note that the walls underwent an inspection in 2013 and another routine inspection is planned for 2018, as per the Ministry’s standard frequency of every five years for this type of structure.  There were no significant structural issues identified during the inspections.”

No ‘significant’ structural issues…. just minor ones.  On a highway that is only 5 years old.

The ministry representative and operation manager have not responded further to the following questions:

1) What structural issues-minor or not- have been discovered and what is the plan for remediation?

2) Are any costs involved covered by warranty  or does the province absorb the cost?

3) Who has signed off on the integrity of the wall?

To this day, and this new story, there are no answers to those questions.

Today NDP transportation critic Claire Trevena brought up the most recent repair in the legislature,asking why repairs are needed on what is essentially a brand new highway and asked the Minister of Transportation Todd Stone to submit the safety reports/audit of the retaining walls.

Minister Stone replied that at times mitigating work is done on all corridors in the province( making this sound like routine maintenance), and completely and quite shamefully evaded her questions on the safety/inspection reports by talking about how the NDP opposed many projects in the province! ( As one reader asked online: Is the new Liberal version of Stone-walling? Clever!)

And that was it. ( I’ll post a transcript as it becomes available)

The work that the ministry is conducting on the Pasco Road retaining wall  are not minor repairs. This is 5 months of work to not only install soil anchors, but to construct a new reinforced facing.

Soil anchors installed in retaining walls after they are built, are done so to reinforce and repair retaining walls damaged by lateral loads, or those showing signs of stress or failure.

Here’s an example of what they look like, installed in a retaining wall on a Hwy 1 overpass years after construction 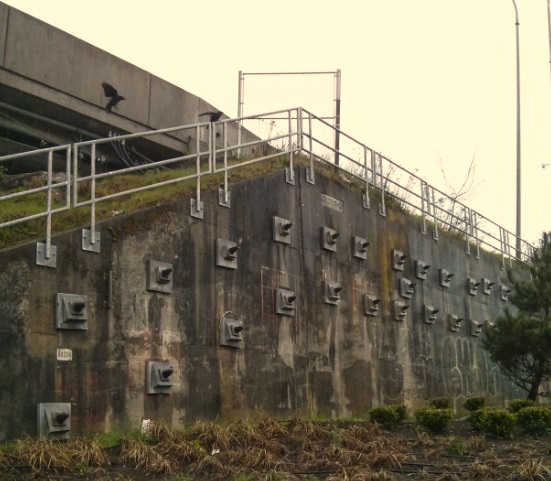 The anchors are drilled into the wall, typically at an angle to provide support and prevent further movement.

One would not expect these kinds of repairs typically in a highway only 5 years old, which leads me back to my original posts ,and questions linked to above.

There are 216 retaining walls built into this highway, and the three I detail in photos at the above links show alarming changes- for the amount of money this highway cost, somebody has some explaining to do.

Was this shoddy construction? Was it rushed? Sources in my prior posts gave a few ideas- I invite you to go back and read both posts.

Minister of  Transportation Todd Stone needs to immediately release the safety inspection reports of all 219 retaining walls along the sea to sky highway, along with a full explanation as to why, on a project billed as a marvel of engineering, after only 5 years, structural repairs are needed at all.

Kiewit, the builder of this highway, has come under examination in the past for a failed retaining wall on the Lougheed highway not built to standards  – something that the minister might want to take into consideration: http://journalofcommerce.com/Home/News/2011/8/Highway-retaining-wall-being-rebuilt-in-Coquitlam-British-Columbia-JOC046056W/

I’ll keep updating this story as it develops, but tune back in tomorrow, as I bring yet another update, on yet another Kiewit built project.

18 thoughts on “Extensive repair work planned for Sea to Sky retaining wall – one year after problems on 3 others first reported here.”