It was the kind of summer day dreams are made of… no schedules,no destination in mind,just loading up a picnic and taking off with no expectations.

The highway led us towards Squamish, a natural and instinctual response to the calling of the mountains and the sea, the road not too crowded but still full of people looking far more stressed out than they should be for a long weekend in summer. 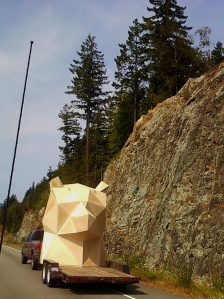 Debate ensued… was it a bear? Or a cougar? And who made this and what was it for?

As we passed by, the driver who had obviously seen the camera out the window  yelled: “Hope you got a good shot!”,smiled,waved and everyone laughed. (Passenger taken photo)

How often do you see something like that going down the road?

We ended up seeing this parked outside the grounds of the Loggers Sport Show in Squamish, but the driver was no where in sight so the mystery remains- unless someone out there can share some insight!

Finding every inch of Porteau Cove covered in people soaking in the sun, we simply moved onto finding something else fun to do – although, I did have a really great conversation with a charming senior who was re-visiting the area after a long absence. I won’t forget the look on her face as she looked out over the water and mountains, arms open to embrace the sun and sea air, as she exclaimed: “There just aren’t words good enough to describe how beautiful this really is.”

Heading into town, we discovered plenty of fun at this challenging, 18 hole mini-golf we discovered at an RV park ! (I thought I knew everything about Squamish since we hang out there enough, but we missed this!)

Shaded for the most part, and with that lovely wind coming in off Howe Sound, old time music playing over the speakers sometimes lead to dancing between the holes. Pink balls and purple clubs? All the more fun!

Rolling with it and being open to whatever happens or doesn’t happen, makes life so much more enjoyable. And it was later on the way home that the best part of the day arrived.

Stopping to stretch our legs and enjoy the breathtaking view, we saw a car parked in the bus zone with its doors open,the driver sitting on a blanket in front with a variety of glitter, paints and glue in front of him. He was just sitting and humming, with a bag of Mcdonalds beside him,chilling out at the viewpoint.

But like a siren calls to sailors on the sea, the car was calling too…. loudly… to all visitors walking by, although none stopped despite being clearly curious.

Walking over,my jaw dropped in reaction to the sight before my eyes – I can honestly say I’ve never seen a car like this before! Click on the first photo to scroll through in full screen,so you can really get the essence of this rolling artwork 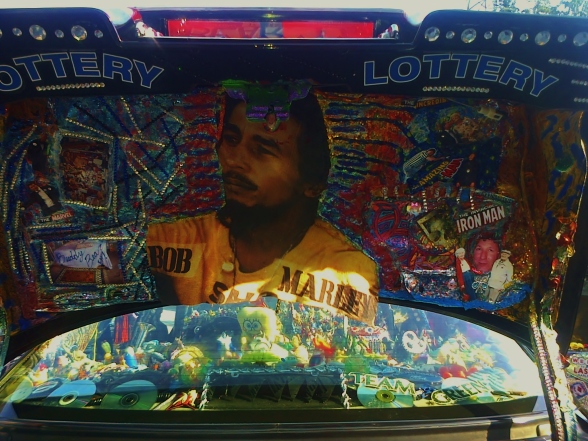 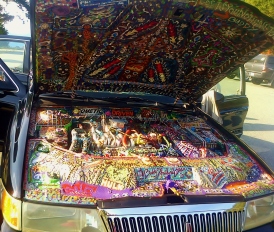 Every single space inside this car, including the truck and engine, is covered and lovingly adorned. Meticulously covered in paint designs and dots, glitter, glued on toys, photos of the owner, photos of his heroes.

Small toys, beads and Swarovski crystals  adorn the steering wheel and the sun sparkled off the surfaces not unlike a sun-catcher hanging in your kitchen window, leaving prisms of colour dappling everything in sight.

Buddy Theodore Bear aka Buddy Bear aka Buddy ‘Teddy’ Bear  is clearly a man living his life on his own terms and quite happy to continue doing so. His skin is burnished golden brown like leather, no shoes covered the worn and dirty soles of his feet and the deep smile lines and wrinkles at the corner of his eyes revealed he likely smiles heartily more often than not.

Buddy shared a lot of stories as he shared his love for his car with us,turning on the interior LED track lights. Stories of eating nothing but McDonalds for the last six years and trying to get approved to raise money for Ronald Mcdonalds house and charity. Of being a groomsman at one of his three ex-wives re-marriage and of being married three times. Of taking time and hanging out and just talking to people,which he clearly loves to do.

Now I don’t know anything about Buddy other than what came up in these moments – he’s just a fellow and his car  we saw sitting at a rest stop on the side of the Sea to Sky highway – nor do I even know if all his stories are real….but I do know this.

He loves his car.

And while many would call this labour of love crazy or nuts or downright stupid…it makes him happy. And it makes other people happy too because it’s impossible not to smile when you see this thing. It made me smile. Talking to him, having him share a bit of his life with us was a gift. And that’s all that matters.

They say that happiness is something so little understood, that it’s often mistaken for insanity. And there is more than a little truth in that I think. I think Buddy has a lot more stories waiting for people to listen to. And I hope to run into him again sometime to hear some more.

Oh and the stuffy he is holding?  Her name is Emily. Emily… Car(r). She’s kind of like his artistic mascot for the car… She goes everywhere with him.

There were a lot of people at that rest-stop, gawking at his car, clearly wanting to see it better but holding back for whatever reason. And if one of them was you,I’m really sorry you missed a chance to have a little conversation with someone outside your box who had so much happiness to share.

If you ever end up reading this Buddy, thanks for spending some time talking and sharing your passion. It was, without a doubt, a highlight of our day. 🙂

The worlds an amazing place, full of interesting people and I can’t help but be reminded of a quote I saw plastered on someones facebook wall once from Greys Anatomy:

Enjoy the beauty. Feel the magic.
Drink it in. Cause it won’t last forever.
The romance will fade. Things will happen.
People will change. Love will die. 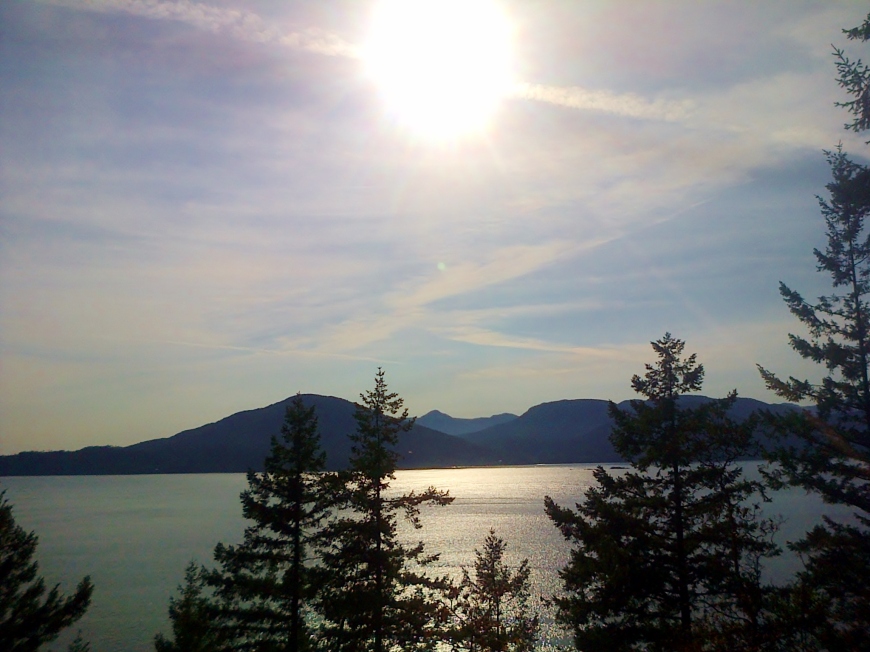 12 thoughts on ““The art of being happy,lies in the power of extracting happiness from common things…” ~ Henry Ward Beecher”