A government built on lies,obfuscation and obstruction,is nothing to be proud of.

Newer readers often wonder why I feel so strongly the BC Liberals need to go, when I am not a partisan member of any political party. The reason is clear if you read many of the stories on my Best Of page – most of them focus on the many deceptions and blatant lies the government has tried to pass off as truth.

Even in the face of confidential internal documents and compelling evidence that contradicts the governments claims, I’ve had communications staff boldly deny, deflect and well… just outright lie to me in writing, emails ( which I am sure were immediately triple deleted) and on the phone.

Combine that tendency for government deception with their regressive policy and taxation, and toss in a premier who would rather campaign,pose for photo-ops and crack jokes more than govern… and you get a list of more than a hundred reasons the Liberals have to go that has carried through two premiers.. No worries – any new government will get the same scrutiny and the NDP in opposition here in BC already have felt that.

But for now, we focus on our current government in power, because they are the ones who drive the boat. And this current triple  delete email scandal just stinks to high heaven,

First of all, if you haven’t read the entire report, you need to do so. There is far more contained within these pages than fully reported on. In fact while the focus has largely been on George Gretes,the ministerial assistant who allegedly lied under oath and whose case has been referred to the RCMP, there are two more issues within the report that have largely been skimmed over by many in the press.

From Page 5 of that report:

Amrik Virk was the minister of Advanced Education, during the time period of that request, but was shuffled to the Ministry of Technology, Innovation and Citizens’ Services on December 18, 2014, following revelations that he was actually aware of the secret bonuses give to new executives in the Kwantlen pay scandal.

Interestingly enough, just days before Amrik Virk was shuffled to his new post,this government guide for staff on email deletion, was revised. 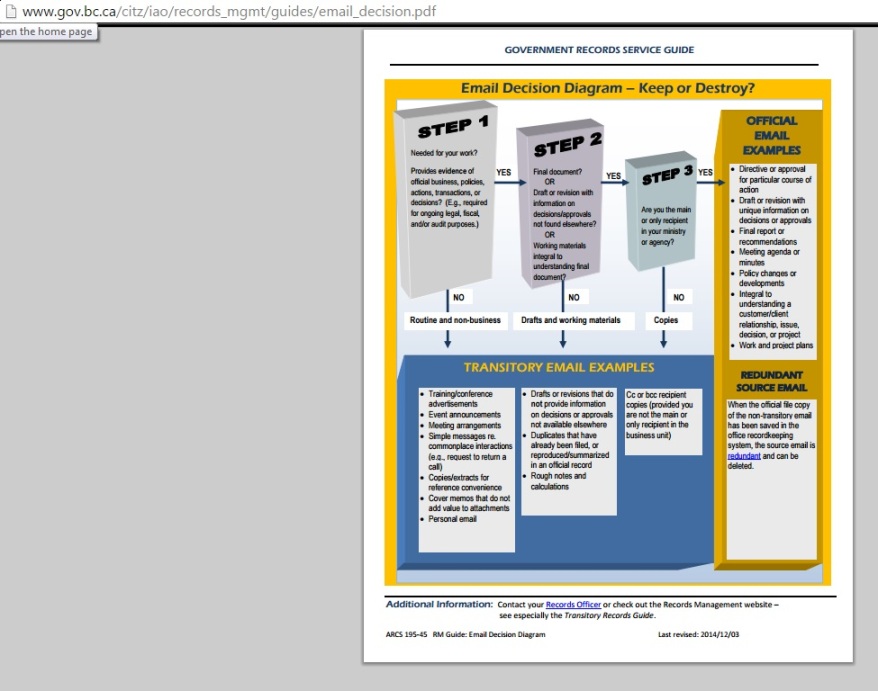 Here’s a close up on that:

Clearly, it was an issue. And this guide is really a bit ridiculous looking in from the perspective of someone wanting to do an FOI, because in my view, provides many outs that make deleting emails that can be very informative,acceptable! And you’ll note nowhere does it address triple deleting emails.

How Amrik Virk still has his post, is beyond me.As a former RCMP officer he knows very well how the spirit of the law is just as important as the law itself. And yet even with all these scandals through two ministries, he stands, fumbling through justifications and apologies.

The other issue which happens to be an ongoing one in the premiers office, is the lack of emails – period.

Premier  cough, I mean Clark, has a long and very serious history of non-documentation during her time as premier, one that also clearly indicates the culture of non-compliance stems directly from the executive office.

It wasn’t so long ago that shockwaves reverberated around coporate and government offices across the country, after it was discovered that there was no written record of an investigation into the inappropriate actions of a former Clark advisor.

And let us not forget Ethnic-gate, in which political staffers used private emails to circumvent FOI rules.

But I digress- there are so many examples of where the BC government, it’s ministers and staff have circumvented or avoided FOI rules and shown a clear disregard for the spirit of a transparent and open government. I could go on forever but Integrity BC has posted numerous examples on their public facebook page recently,along with other pertinent info.

At the heart of the matter is a refusal for the BC government to include the duty to document in its own legislation. In fact the government has completely ignored Privacy Commissioner Denhams repeated calls to have a legislated duty to document.

Foremost among my recommendations is the provision for a legislated “duty to document” key government actions and decisions in Bill 5. This was the main recommendation from my July, 2014 special report into the current state of government archiving in British Columbia, as well as my March, 2013 investigation into the increase in no responsive records replies by the provincial government in response to general access to information requests. It is only when key government actions and decisions are documented that access to information regimes and public archives can be truly effective. It remains my view that a duty to document should be included in the Government Information Act

On three separate occasions since 2013,the premier who promised the most open and accountable government,has ignored the commissioners very important recommendation.  Why?

And why, instead of making the duty to document part of the current legislation, did the government instead remove the penalties associated with the improper handling of government documents?

This bill will do nothing to stop the spread of this cancer on government transparency.

Bill 5 specifically removes the application of the Offences Act, so there will be no chance of anybody in government facing legal consequences for improper actions dealing with government documents.

This is quite a contrast to the government ‘s actions in the Ministry of Health data breach case, where they called the RCMP about the potential misuse of government information. We hope the government will be able to explain this difference as the bill is debated.

It’s something I’ve written about several times, here, here and most recently, here.

A government that doesn’t document investigations into inappropriate behavior, doesn’t use email in the premiers office, speaks in person to avoid FOI’s and triple deletes emails so no one can ever recover them. And the really ridiculous thing is, it is so damn easy to prevent all of this – if you really wanted to.

But they don’t. And in my opinion, heads should roll. This has been going on since BC Rail days when backup tapes of all the emails for Gordon Campbell and the ministers were erased. Oops.

This government is out of control and unaccountable. And people have died because of it. For the premier to repeatedly  claim a lack of knowledge to any of the incidents involving her office and those closest to her,can only mean one of two things: either she is incompetent, or complicit.

It’s not something to be proud of and I urge those in the Liberal government with integrity to speak up and stand up against this.Because it’s just a matter of time before more people are going to speak out. Some already have.

BC Liberals, BC NDP, BC Politics, BC Rail, Corruption, crime
bc liberals, Bc Rail, christy clark, duty to document, FOI, Murdered and Missing Women emails, removal of penalties for document destruction, Rod MacIsaac