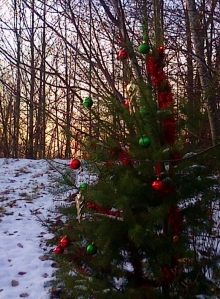 Greg Kincaid is the author of the book: “A dog named Christmas”, that went onto become a TV movie. He has a wonderful way with words and the quote below really speaks to the tone of the past year – not only for myself, but for so many of us here that are engaged in community activism, politics and trying to find a better way. A better analogy would be hard to find.

The next couple of days are going to be a whirlwind as I start preparations for the holidays.There’s a turkey to be deboned and marinated for the BBQ (that’s how we’re rolling here this year) along with a dozen other things that need to be done. So this morning is the last you’ll see of me with the exception of a few tweets or FB posts by phone.

Some of the stories this year in BC politics have been overwhelmingly sad and appalling. When people take their lives, when kids in care see no other option but to end it all, we’re doing something very wrong. And when those in charge refuse to be accountable,in some cases misleading the RCMP in order to do so, something has to change. The stories keep coming, and we keep plowing through to keep the roads clear – if we stop, it’s easy to get overwhelmed. And I strongly suspect we only know half of what’s really going on.

2015 was the year I had my own Kai Nagata moment, leaving both The Duel column I’d written for years,and then ultimately leaving 24Hours altogether in protest of Postmedia’s downward spiral. It was the year that pitted mainsteam media against independent and alternative media, and in some cases, mentors against students. I’ve always, from day 1, used my writing as a blogger,or a columnist to not only tell stories, but make changes happen. 2015 was the year that was used against me-a surprising moment that continues to define my choices moving ahead.

Yet while there is so much wrong to write about and try to change, there are many wonderful things to celebrate as well.After years of having an MP I couldn’t even find,who failed to appear when it mattered, I have an MP who not only answers calls, but actively engages with all in the community. (Shocking, I know!)

After years of Nimby-ism and a lack of political will to make it happen, the City of Surrey finally found a location for a winter shelter for the many people on the street. And while it doesn’t solve the bigger issue, it does provide reprieve for those who need it. There were several Christmas celebrations held for those living on the streets in Central City this year,and much care involved in all.

One local community leader, Jen, brought cards and stamps for those on the street who wanted to send a note to someone they loved, even offering to help find an address if they didn’t have one. Absolutely heartwarming.

David Dalley and the Newton BIA held the first and very successful Halloween community party in Newton, which also has it’s own art gallery now, Agent C.  The Grove still faces some challenges but is a space actively used by the community for things like Encylopedia House and free food planters. We sang carols there recently,as one of the big storms rolled in!

I’ve been witness to so many new people getting engaged in their communities all across the province-a move that signals a trend I hope will continue. I’ve met with many people who are actively trying to keep those people engaged and help others to understand why their participation in the process at some level, is vitally important for our democracy.

Through social media, we’re not only finding each other,but connecting all across the province and country! Despite all the trolls and partisan sniping, those connections are building bridges like never before among progressive people.The medium isn’t bad,it’s how many people use it.

We can build a better way. We will change how things are done. We will define the future of our province ourselves,we will not let wayward politicians define it for us. And we will not let those sparks of engagement go out once lit. The defining story of 2015 is not the politicians…it is the people who are making change with no spotlight all around us.And you are part of that story, and how it ends.

So as I am tugged by the arm to go string cranberries and popcorn for the critters outside, I leave you with these last thoughts. To my friends facing challenges right now, I wish you strength,courage and be easy on yourself – you are each in my heart and you know who you are.

And to all, however you celebrate, let go of expectations and demands,let go of the drama and simply enjoy. Find your voice. Live in the moment.Love as much as you can.Thank you for being a part of this,even when we don’t agree.

And remember… “No matter how much falls on us, we keep plowing ahead.That’s the only way to keep the roads clear.”

8 thoughts on ““No matter how much falls on us, we keep plowing ahead.That’s the only way to keep the roads clear.”~Greg Kincaid,”