Updated: The ‘road’ less traveled did make all the difference…for these two bald eagles

*Click on any photo to see it full size

Sometimes, the road less traveled really does make all the difference… and today it helped save two bald eagles in Delta.

Wanting to get a walk in before the rain forecast this afternoon arrived,we headed off to the Delta Watershed. Normally when we go, we have a particular series of trails that we stick to, but this time we ended up on a not very well used trail on the high side of the ravine above one of the streams in the park.

We have never been on this trail before,and it was more than a bit dodgy at times…. 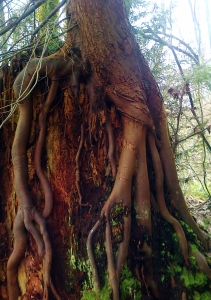 Tall towering trees, and younger ones like this one growing off the stumps of giants long gone and toppled. It’s a magical part of the trail system and off the beaten path entirely.

As we walked along,we heard the chattering of a small bird that sounded not unlike a chipmunk. Stopping to try and spot it, a wee bird ran along the ground and hopped up on a fallen tree chirping at us in a rather insistent matter. It kept coming closer and since we had nothing to offer it we moved along.. and the little bird flew after us and again, landed and started started chattering at us.

It was then, just a few steps down the path, we heard a strange noise,a rustling and then a beating sound, but very quiet. Not seeing anything but curious, we moved over to where the sound had come from … and spotted something amazing.

The eagle on the far right, was suffering from wounds to the back of his neck, clearly inflicted from the one staring at me. There was quite a bit of blood still flowing from the wounds as well.

The closer eagle appeared to have more superficial looking wounds to his wing and was far more active. I called a friend to get the number to OWL Wildlife Rescue that specializes in raptors, we called and they sent two people immediately. Everyone left to meet the rescue team at the main lot which was quiet a distance from where we located the birds and I stayed behind to guard them from un-leashed dogs or any other threat.

It took only about thirty minutes for them to meet the crew at the main parking lot and be guided back down to where  I was with the eagles, and during that time the eagles were so amazingly calm and didn’t seem to mind my presence. Twice people with unleashed dogs went by though, and the sounds of dogs agitated the raptors so I took off my sweater and laid it over them to keep them calm.

Untangled at last, getting ready for the hike back to the rescue van

Taking a much needed rest on the hike back.Colin and Mindy were amazing at handling these majestic birds, although Mindy did take a sharp bite to her upper arm! 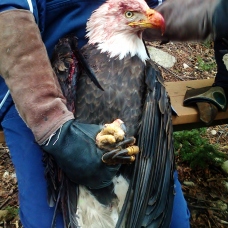 The older of the two eagles – you can tell by the crackles in the yellow of his eye. Mindy said he was likely an older teen to early twenties. And he thoroughly schooled the younger bird he was fighting with!

All loaded into the van and back to OWL.

After it was all over, we really just couldn’t believe everything that had happened! It’s still a bit surreal. That today of all days, we took a path we never have, heard that small bird and found the eagles under the thickness of this tree… it’s really amazing.

While we’ve always attended the OWL yearly open houses and supported the work of the amazing people who work and volunteer there, one never expects to be involved in a rescue like this firsthand – it’s hopefully a once in a lifetime experience because it’s  terrible seeing just majestic creatures injured. We learned that you can tell the age of an eagle by the ‘crackles’ in the yellow of their eyes- younger eagles have none, older ones eyes look like crackled glass. We also learned that they will fight to the death over territory and these two clearly intended to do just that.

The speed of which OWL responded and the dedication they show towards helping all these amazing raptors is so admirable – we have so much respect for what they do. I just called and spoke to Mindy, and both birds are in recovery for now, having both had a good amount of sutures. The bird Mindy is holding about also has a broken wrist, and may need more attention once he stabilizes.

We’re also very excited to hear that if and when they recover and are ready to release, we can be there and help do that – another once in a lifetime experience – so we are hoping and crossing our fingers for full recoveries for both!

OWL does not receive any government funding and relies entirely on public, corporate and private donations to operate. Having seen firsthand how much is involved in every single rescue,let alone the care and feeding after,shows me how much they really need our help to continue their good work .Check out their site here: http://www.owlcanada.org/aboutowl/ and you can donate through this link: http://www.owlcanada.org/you-can-help/donate/

They also have a wish list- if you can provide any of the following, please give them a call!

And of course, make sure to attend their Open House this year for tours,activities and an amazing learning experience! 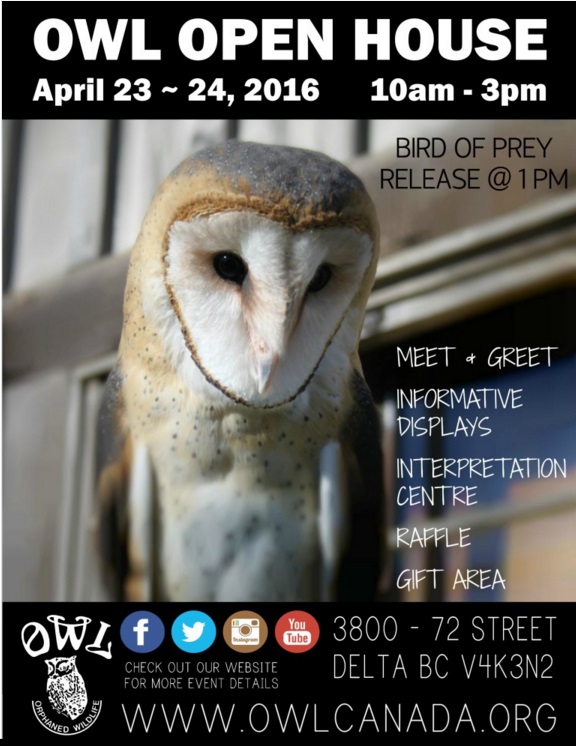 As for us?  Feeling blessed to have taken the road less traveled today. 😉

After a lengthy rehabilitation, I’m thrilled to let you know that both birds were released today at the OWL annual open house, which was a packed event! Vehicles lined the road to the facility in a stand still traffic jam and we nearly didn’t make it in time to see them go,running up the drive and arriving moments before the release.

One bird was a prior patient and was banded, the other is now banded as well in the event it is injured or captured for some other reason. One of the eagles had an older injury as well, the result of being shot with a pellet gun. His injury will never heal correctly but doesn’t hamper his ability to fly or otherwise survive in the wild.

I can’t even explain how thrilling it was to see both stunning birds fly overhead, free again at last – it brought some strong emotions to see them fly off into the wind,after finding them in such bloody and battered condition. And one of them even flew back over the crowd a few moments later as if to say goodbye 🙂

Here is some video of the release- the first is an explanation of how they came in and arrived and then both birds were released within 10 minutes of each other, in the videos that follow.

I encourage everyone to check out OWL, and always keep their wish list in mind if you can help out. They are serving not only local raptors, but those injured from all over the province. Donations of cash are always appreciated and very critical to their continued work of saving amazing birds of prey!

← “Another world is not only possible,she is on her way.On a quiet day, I can hear her breathing…” ~ Arundhati Roy
Will BC Hydro still argue that the energy from Site C will flow to British Columbians? →

25 Comments on “Updated: The ‘road’ less traveled did make all the difference…for these two bald eagles”