Breaking news this morning that the Saanich school district will be joining the Vancouver school board in defying the provinces balanced budget requirement, to take a stand against ongoing funding cuts.

It’s been a long time coming,in my opinion and I applaud districts taking this firm stand,as the last line of defense between students and the government.

Over the years in Surrey, we’ve seen the district add an extra week to Spring Break to make up a budget  shortfall and extra long weekends throughout the year-moves that have become permanent lost instruction days. We’ve seen cuts to services across the board. We have schools so crowded there are staggered start times and highschool kids are forced to eat sitting on the floors for lack of space.

And that’s just education. Try sitting in the ER at Surrey Memorial or Royal Columbian. Hospitals crowded with patients in the halls. Not enough nurses. Not enough doctors.

The fact is for a large percentage of British Columbians, life is not a sunny government paid for campaign ad. We have a child poverty rate to be ashamed of. We have a mental health and addiction crisis on our streets with few resources to even begin to make a dent. Please explain to me if the leaders of this province are doing such a good job,we still have such huge issues and funding cuts in so many sectors?

Because this is what happens when you don’t replace the revenue from slashing taxes across the board when you come into power, as the BC Liberals have done since their first year in office. Low taxes are indeed great…. if a government has an alternative way to bring money into the provincial coffers. But in BC, the reduction in taxes for people like you and I was replaced with higher MSP premiums,higher tuition fee’s and regressive taxation alternatives.

Did anyone really end up ahead with ‘ the lowest taxes ‘? Yes – corporations and high income earners.

We all know LNG is not the goose that laid the golden egg.  Revenue from natural resources makes up a very small percentage of our provincial income now. And the provinces own budget forecast increasing revenues from higher MSP premiums and tuition fees,items that hurt people who can least afford them.

The Canadian Centre for Policy Alternatives has done some great work on this issue. In 2013 they released a comprehensive report looking at progressive solutions to generate revenue in the province to deal with all these shortfalls and cuts. https://www.policyalternatives.ca/sites/default/files/uploads/publications/BC%20Office/2013/01/CCPA-BC-Tax-Options_0.pdf

And while the numbers obviously need tweaking to reflect 2016/2017, this summary presents ideas I think are worth considering for discussion: 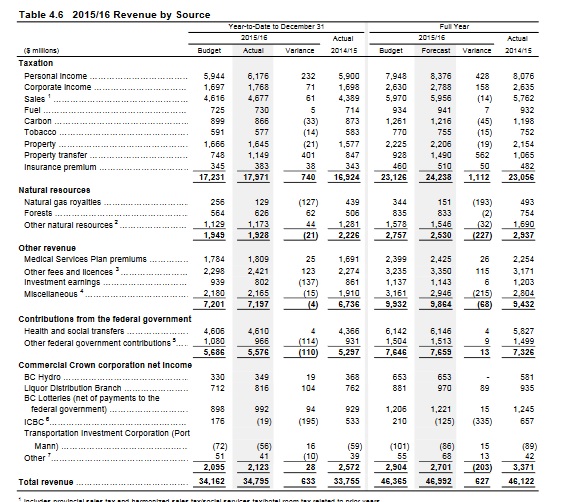 All these corporate subsidies are getting us nowhere on the revenue front. Under this government leadership,we are bringing in more from MSP premiums than from corporate income tax. Almost more than natural gas and other resource revenues. Am I the only one who sees something wrong with this?

We have to have this discussion-it is ridiculous for the province to continue to demand cuts and offload costs onto cities and school districts while the premier is taking a top-up from donations to her political party. That influence is, without a doubt, shaping policy in this province.

And I think it’s time to say enough is enough. I would rather see an honest tax than a death by a thousand little cuts,a skill this government has mastered.

***For parents,educators in Surrey (and good advice for other parents in districts facing cuts.)

Sharing this, posted by a local parent and advocate on Facebook:

If you live in Surrey, please read and share with your friends and facebook groups for your neighbourhood.

We need to keep the momentum of Laurae McNally’s motion and the media attention since the motion. In talking with a couple of different politicians (including MLAs), they recommend that everyone email and call as many MLAs and City Councillors as they can. Apparently, each time a letter is written, a file is created and brought forward during their internal meetings, including when MLAs are speaking in the House. Apparently petitions are generally received as ONE person, not as the number that have signed it.

We need to inundate them and the more pressure they receive, the more likely they are to listen. Let’s all try to make as many calls and write as many emails as we can over the next week. The idea behind this is that we are creating loud noise that makes it near impossible for them to do anything but receive emails and phone calls. Even leaving voicemails in the evenings will help.

One other note: Many MLAs and Councillors will ignore if they are copied on an email, so you need to send individual emails.

Reminder: City Council meeting, May 2nd at 7pm. Come for 5:45pm if you want to hear about land use. (The meetings are held at City Hall in North Surrey)

3 Comments on “A discussion on rational, progressive ideas for solutions that’s long overdue.”