‘…with glowing hearts from sea to sea, we stand on guard for thee.’

We were sitting in silence my beautiful daughter and I, basking in the warm sun as we moved across the Salish Sea on the

poor mans cruise ship known as BC Ferries, tingling with anticipation of the adventure ahead when I looked up, saw the coastline… and my heart sank.

“Damn!”, I thought. ” Damn,crap,*@#&$!!*” We were on the wrong freaking ferry! Instead of going to Victoria, we were very clearly headed towards Nanaimo…

So thrilled to be going on our first girls only over-nighter with my daughter – who at 19, had saved to treat me with tickets to my first Tragically Hip performance at the first Rock The Shores festival for my 40th birthday -we’d somehow walked onto the wrong damn ferry…

I shook my head thinking back… we’d walked into the terminal and not seeing a sign asked two workers if this was the ferry to Victoria. The had smiled and said yes and we never even noticed the overhead in our excitement…

I broke the news to her, expecting tears or.. well I didn’t know what to expect to be honest, but she doubled over in laughter and it was so contagious that I started laughing hysterically too. We ran to the info office and talked to the steward, who notified the captain and when I explained why this was such a significant trip for us, they helped figure out if taking a bus back or taking the ferry back to Tsawwassen and getting on another one to Victoria would be faster.

Long story short, while everyone was disembarking in Nanaimo, we were still sitting on the ferry, charging our phones in chagrin. Passengers loaded and the overhead speakers crackled: ” Welcome to the spirit of ….. this is the ferry to Tsawwassen. Please check your tickets to ensure that is actually where you are going. If you are going to Victoria, this is the wrong ferry and please get off now.” 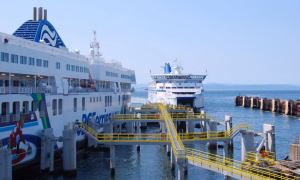 While new passengers looked at each other with puzzled faces over the weird announcement, our mouths dropped before we sank into laughter again. It takes talent to get on the wrong ferry…

I texted a friend in Langley, explained what happened and that we were concerned we might not make it from the terminal in Victoria to the festival grounds in time. After she finished laughing… which was a considerable amount of time… she gave us the number of friends in Victoria. Somehow we ended up talking to another friend on the island too, one who offered to come pick us up and drive us into Victoria to make it faster. And yes, the entire drama was posted to facebook at the time much to the amusement of all our friends! Everyone was watching to see if we would make it to the Hip on time.

Three ferry rides and nearly 6 hours later , plus a personal escort  from ferry staff to make sure we actually made it onto the right ferry back in Tsawwassen ( toss in a ton of friendly  but well deserved ribbing from staff who were more than helpful to get our trip fulfilled) we arrived in Victoria, where our friend David was waiting in his car.

David not only provided us with a place to clean up momentarily, he also drove us right to the festival grounds and gave us a fold up vinyl backed fleece blanket ‘ just in case’. Hugs and kisses and he was off, and my daughter and wandered off to find food, drinks and a spot at the front. 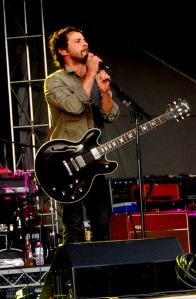 It did not disappoint. Current Swell rocked the house down but it wasn’t until Sam Roberts made it up that I pushed into the mosh pit.

Yeah, me, in the mosh pit. Moshing. At about-to-turn-40. And it was for the most part, incredible but suddenly the wind was picking up,fast and lightning cracked  while strangely glorious dark clouds swirled around the skies.

Sam left the stage as the rain arrived with more lightening, and the stage…well it almost left the stage too. Crew were running around tying things down and some people left, but while Mother Nature showed her true glory, we huddled under the blanket David gave us,because we didn’t just travel 6 hours on BC ferries to not see the Tragically Hip!

While the skies unleashed sights and sounds rarely seen in that magnitude on the south island and we waited to hear if the concert would even resume, we met some wonderful people,started talking and shared the days follies.They laughed and asked about why hearing this was so important.

I told them that my 40th was coming and that my daughter who had worked so hard for her wage, had done this because she knew I had never seen the Hip and wanted to share that first experience with me of hearing Gord Downie sing Bobcaygeon- my all time favourite Hip song- live,together. They looked at each other and smiled and it turned out that one of guys talking with us and the other couple, was a Hip crew member on that event! 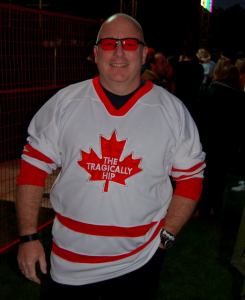 One of them let my daughter try on his Hip Canada hockey jersey and just as we started to confront the fact the concert might get cancelled, someone ran up to them and said the band was going to go on. They had to go,but said usually Bobcaygeon is played towards the end or on an encore, but they would check the set and see what was going on

Second song in, while lightning and thunder still  raged overhead, Gord came out and sang Bobcaygeon…and I sang,so loud, arm in arm with my daughter and a whole bunch of other people who just randomly locked arms and sang and swayed in the moment. There would be no constellations revealing themselves one at a time, and the wind was crazy at times, but he sang on.

And on… and even when the rain started again, Gord and the band kept rocking out the hits  when others might have left- and probably should have to avoid being electrocuted – but he just kept  played on, dancing just like everyone was watching and he just doesn’t give a damn because why should you after all?

I just think that is the kind of guy he is. He wasn’t going to leave these people hanging and even called out to Mother Nature at one point after some lightening, to give him more,to give him all she had… and she did. And he stayed singing…

This was my first – and thanks to the ticket debacle here in Vancouver -the only Hip concert I will ever see, but as your voice rang strong and mournful, belting out Fiddlers Green,  that crazy crazy lightening cracked over-top the stage in a light show not too many bands could command…I knew that it might be the most special.

Yeah. Pretty powerful stuff.  And Gord and the band? They never even missed a beat.

For me and my daughter, it was the most quintessentially Canadian thing ever, not just because of the Hip, but because of all the people-many we didn’t know or hadn’t met in person- who went the extra mile to make sure we got there.

Gabi? Met her through this blog. Diane and Brad? Same. David who came to the ferry terminal,picked us up and drove us to the concert site? Was originally a former government source, who became a good friend after retirement. 🙂 Never met him in person either before this adventure, but that didn’t stop him from coming to our aid and going above and beyond the call of duty-it’s what we do here in Canada. We help each other. We bolster each other up when it’s needed, whether its online or in person. And the community we have built here is very real, and very tangible and very, very strong… and I am thankful for that. 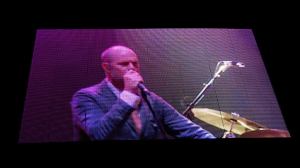 When I heard about Gord Downie’s diagnosis this year, it pissed me off that someone who has given so much of himself to others, had to experience this.

And not surprisingly, the Hip announced they were doing a concert tour and not even knowing the man, I can’t imagine anything less after seeing him dance,sing and shout at Mother Nature to bring it on harder at Rock the Shores back in 2012 when honestly, that lightening could have ended it for him right there.

It is just who he is.He loves what he does,he clearly loves his audience and we love him. So very much.

And I want Gord and the band to know, if they happen to read this, how very much that meant to me that they  played that night, in such risky conditions, when most would have stopped. You were the crowning moment of a memory my daughter and I will look back on and laugh and smile about for the rest of our lives. And I knew that I had to finally write about this now,so you knew.

You were there for the crowd.For us. And now we are here for you. ❤ Because that’s what we do here. We take care of each other. We share the best and worst and everything in between and we show the world our best.

Happy Canada Day my friends.There are  so many different paths that bring us together here for a common good, so let’s use that thread, no matter how small, to make something better, something stronger.

So let’s get it done, ok? For something bigger than just you, or I. For those Canadians like Gord who inspire us along the way… and for each other. “ with glowing hearts from sea to sea, we stand on guard for thee…”

← Things that make you go Hmmmmm, Mike Bernier vs VSB edition
Tune in to this weeks edition of ‘Political Intel’ with Martyn Brown on the Jon McComb show, via CKNW Newstalk radio →

7 Comments on “‘…with glowing hearts from sea to sea, we stand on guard for thee.’”