Monday Morning Musings from the island: “I don’t need to make jokes. I just watch the government & report the facts.”

It was a gorgeous weekend here in my bit of island paradise and the pic above is just a wee inkling of how nice it was. And after some bizarre politics last week it was nice to just chill at the shoreline, watch the bald eagles gorging and just enjoy  big skies and a calm sea.

A wise person once said Money can’t buy happiness…which may or may not be true depending on your perspective…but it sure as hell can buy votes. And the BC Liberals know it so they went on a vote-buying spree just prior to the budget to put out as many feel good moments and photos as they could. Because they truly, deeply…and suddenly care about y’all right before this election!

*Pardon the affectation. I’m trying to channel my inner Clark, the one she uses when she visits rural areas in her checked shirts and talks all down home to the locals like she’s a good old girl like one of them.( Except for when she’s Filipina… ) Did it work for you?*

I digress. Back to the vote-buying… So imagine that moment when an MLA so eloquently announces a million dollars in funding for a youth  safe house…that closed two years ago due to lack of funding!

This is the original story of the announcement : http://www.missioncityrecord.com/news/414112053.html

“There won’t be million dollars going to the Iron Horse youth house.

That’s because there is no such thing anymore.

Friday’s announcement on homelessness by local MLAs Doug Bing and Marc Dalton said $1 million will go to the Iron Horse Youth Safe House as part of an affordable housing initiative.

However, the safe house, where kids could stay on an emergency basis, closed two years ago, after federal funding ran out.

Instead, the money will go to some other housing project involving youth, although details are unknown.

“When we announced it, we didn’t have all the details,” said Dalton.

“I know the money is committed – how it will play – I don’t have those details yet.”

Bing on Thursday he still hadn’t heard any more about the project.

Tony Cotroneo, community services manager with the City of Maple Ridge, also wanted to clarify, that there will be no emergency shelter for youth.

“We’re not getting a safe house where we can refer local youth to. That’s not what it is.”

He said he wanted to make sure that youth understand that.

“Nobody has talked to us to clarify what services are being offered there.”

The emergency shelter part of the Iron Horse Youth Safe House closed in February 2015 after a lack of federal funding, followed by the day program’s closure in April 2016.

Christian Cowley, with the CEED Centre, notes there is no youth shelter of any kind in Maple Ridge or Pitt Meadows.

“We need at least three shelters to temporarily house the 16 youth between ages 13 and 17 currently on our streets,” Cowley said in a letter “

Ahh… sorry Marc, but what the heck is going on here? In December 2014 you said you were going to advocate for funding to prevent its closure…http://www.mrtimes.com/news/317638501.html?mobile=true

Two years after that closure you announce a million dollars for its operation? Are you so disconnected from your riding you forgot it closed? Or just a mindless drone that just reads whats on the paper  they stuck in front of you without actually comprehending what it says?  Either way, you lose bud….

Onto cracks. There are all kinds of cracks in this world: cracks in the veneer of Kim Kardashians make up, low pants cracks (shudder), and then there are the cracks in the bank of Site C that just keep coming back and getting bigger. Now,  after a year of reporting on cracks,slides and more slides, a 4oo metre ( 1,312 ft)  crack has formed and it can’t be ignored like all the other smaller cracks and landslides have been by some major media outlets. 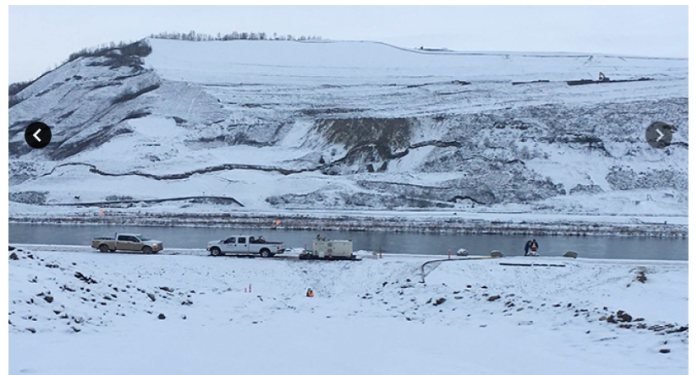 A 400-metre crack has formed along a haul road on the Site C dam construction site, leading BC Hydro to reassign 30 workers while the area is assessed.

BC Hydro released details on the issue Feb. 24.

“During the construction of a haul road to support this excavation work, a tension crack has appeared” on the north bank of the dam site, a release reads. While such cracks are not unexpected in the area, “this particular crack requires attention due to its significant 400-metre length,” BC Hydro says.

In an interview, Site C spokesperson David Conway said work was continuing on the rest of the site and that the issue would not affect the overall construction schedule.

It is the first time a news release has been issued about a geotechnical issue on the dam project since construction began in summer 2015.

BC Hydro says the crack is being monitored by slope stability experts.

Indeed it’s being monitored. The issue is… why are they even building a dam along a river valley with slopes so unstable that a government commissioned report stated:
“Valley slopes throughout the region are subject to slope failure and colluviation, and the development of these sites should be minimized.”

Ironically, one week before this giant crack appeared, Norm Farrell posted pics at his sight of other cracks on slopes above the site. https://in-sights.ca/2017/02/17/blunders-haste-and-waste/

And I’ve been reporting on the troubles for the last year. I’ve said it before and I will say it again… the Site C dam debacle is going to make the Fast Ferries look like pocket change.

I hate to say…I told you so. But I did. As did others. No consolation when friends are losing their homes, their traditional lands and we as a province are losing an area the BC government even deemed as a Heritage river.

I have work to do but before I go, two more things.

First, I thought you might want to read a current look at raw log exports, something that’s been an ongoing issue through several elections and yet… our current government does absolutely nothing to stem the flow of wood and jobs overseas. http://www.policynote.ca/log-export-drain/   Long time readers know we have been talking about this as far back as 2011.

Second, someone leaked to me ( oh god did the NDP hack the computers again?) the Liberals internal motivational badge for this election. Thought you might like a peek:

← Not Forgotten. How many children must die before someone takes responsibility?
Polling questions offer glimpse into BC Election 2017 issues..and raise eyebrows on future of Site C →

46 Comments on “Monday Morning Musings from the island: “I don’t need to make jokes. I just watch the government & report the facts.””