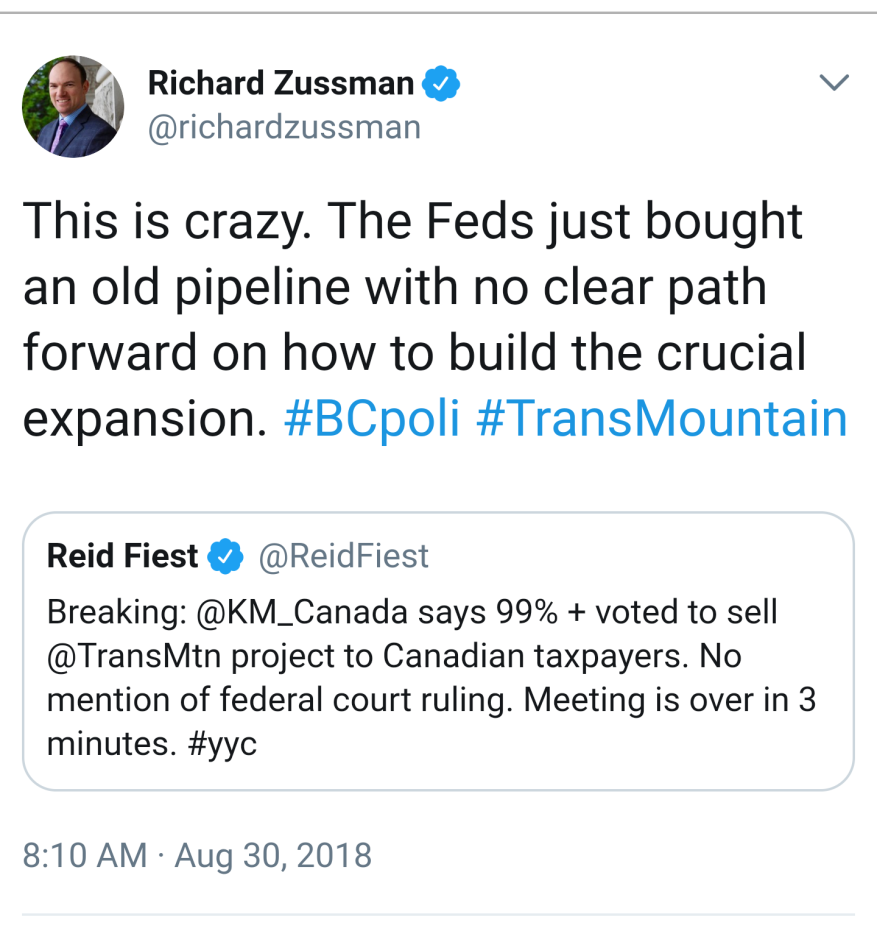 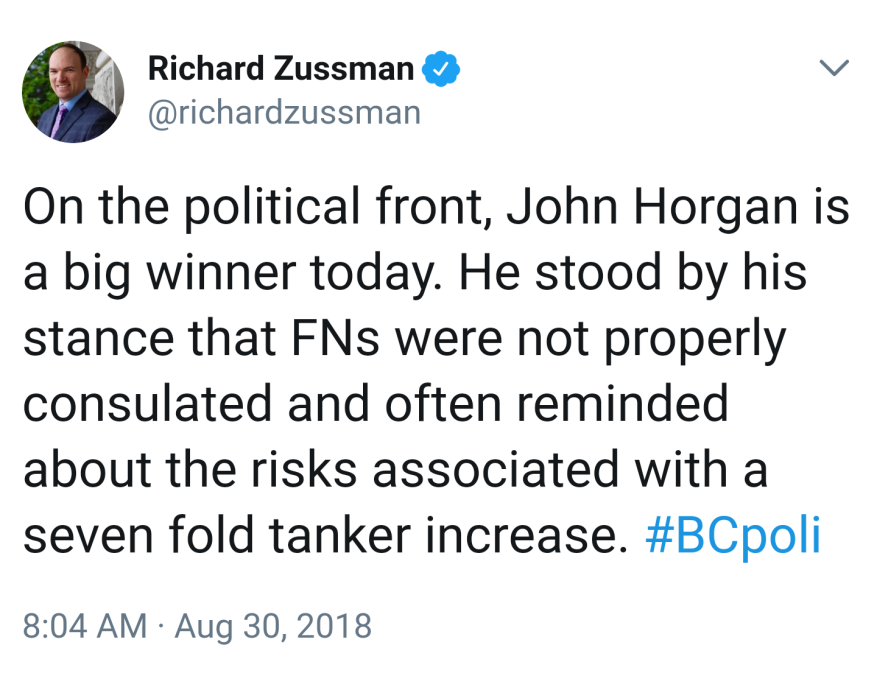 Yes, KinderMorgan has been squashed for now and Trudeau bought a pipeline to nowhere….but it’s Zussman’s tweet on Horgan that doesn’t sit well.

Horgan can have the win on tanker traffic,but Zussman may have forgotten how Horgan put First Nations concerns on site c aside quickly to make his decision to continue building the dam.

Premier John Horgan said he is not bound to uphold his commitments to reconciliation with British Columbia’s First Nations in the case of the Site C dam, saying the $10.7-billion dam his cabinet has decided to complete is not really his project.

“It’s my view that activities that began before I was sworn in as Premier are out of my control,” Mr. Horgan said in an interview on Tuesday. “In the case of Site C, I really have to say it is 25-per-cent done. It’s not like I’m going to [start] it – I’m going to finish it.”

I still don’t know how he reconciles that. Particularly since government lawyers have been in court arguing on BC Hydro’s behalf that Treaty 8 doesn’t mean a thing…

As an example of BC Hydro legal arguments the UBCIC said were “consistently diminishing the rights of First Nations,” the letter pointed to BC Hydro’s claim in court that Treaty 8 was never intended to protect First Nations “practical, traditional, cultural, or spiritual connection to any land.”

The UBCIC executive took aim at BC Hydro’s assertion that the “meaningful right” protected by Treaty 8 “can be reduced to the simple act of hunting, fishing or trapping devoid of the traditional knowledge, protocols an and oral histories that make these acts so meaningful and essential to First Nations.”

“This cynical denial of Indigenous peoples’ own understanding of their rights is the basis for BC Hydro’s unscrupulous denial of the crucial importance of the Peace River Valley to Treaty 8 Nations,” said the letter.

It pointed out that B.C.’s Hydro’s oral arguments “also demonstrated disrespect for the wisdom of First Nations elders and tradition keepers, treating their oral evidence as little more than hearsay.”

Benjamin said commitments made by the federal and provincial governments to uphold the UN Declaration on the Rights of Indigenous Peoples and work towards reconciliation signaled an important shift for legal cases such as the West Moberly First Nations’ injunction application.

West Moberly First Nations and Prophet River First Nationfiled a civil suit in January claiming that the Site C dam and two previous dams on the Peace River are an unjustified infringement on their constitutionally protected rights under Treaty 8.

Until now, it has been generally accepted that government lawyers can go into court and use every argument at their disposal “to fight against recognition and respect for Indigenous rights,” no matter what the same governments say in the public sphere, Benjamin said.

But now government lawyers are expected to be “accountable to the promises made by government in the kinds of arguments they make in court,” he said.

The contradiction is clear. And while prior Site c cases have not resolved in favour of Peace River area First Nations and residents, this current case is different. Treaty rights are constitutionally protected and Hydro’s essentially arguing they don’t matter…an argument that could set dangerous precendents for other treaty holders across Canada.

That it is our current government fighting this in court in opposition to their public stance, is stunning in of itself.

While most have focused their opposition on KinderMorgan while that played out, Peace River First Nations have been largely fighting alone with the support of a small group of dedicated British Columbians and very little media coverage.

It’s been a battle for attention because site c is tucked away in North East BC. As Chief Roland Wilson said, if this was happening down there ( metro Van/southern coastal BC) it would have been shut down by now.

It would be amazing if you all turned your attention to site C, and this case now. Site C is still wrong, financially and socially, and continues to be a gong show of epic proportions.

West Moberly and Prophet River will be back in court September 4th in Vancouver. They need your support.

Hearings daily in Vancouver Supreme Courts at around 9 am- please ensure if you are going that you arrive early and check the board for courtroom number.

( meanwhile read this to see how the BC Libs played silly bugger Enron like accounting with BC Hydro-good on the NDP for at least acknowledging the deferrals-they need to get on those IPP contracts though. Bug rate shocks will be coming:  https://vancouversun.com/news/politics/political-directives-have-undermined-b-c-hydros-finances-auditor-general-says )