**If you are just arriving and have not read Part 1 of this story, please do so here, and take a moment in the comments section too: https://lailayuile.com/2018/10/01/if-the-land-falls-down-around-site-c-does-anyone-in-victoria-hear/ **

While many were busy observing Thanksgiving last weekend, the people of Old Fort were left in confusion and distress, as the evacuation alerts issued last week following the initial slide, expanded and became evacuation orders. In a heated meeting yesterday – live-streamed on Facebook by the Peace River Regional District – residents heard what many knew in their guts already… it’s only going to get much worse over the winter before it gets better, and they won’t be able to go home until at least next spring. One official did go as far as to say perhaps even next summer as the situation with this slide is changing daily, and winter freeze/thaw cycles will no doubt wreak further havoc.

At a public meeting Monday, residents were given an update on the situation and there are now three active slides in the area. The main slide that started on September 30, is moving anywhere from 5 to 10 metres per day and the slide has now reached the channel next to the river.

The initial slide has activated a slide on the western side that is moving four metres per day. There is now a third slide that is east of the original slide. According to the geologist hired by the Peace River Regional District, the entire subdivision is at risk.On top of the three active slides, an older landslide could reactivate. The relic slide has shown signs of deformation.

With winter almost here, the slide conditions will only get worse which could mean residents might be out of their homes until spring or summer. The precipitation and colder temperatures will make the slides more active.

A spokesperson from the Ministry of Energy, Mines & Petroleum Resources told the crowd a stop work order was issued immediately for the gravel pit. There are approximately 40,000 to 50,000 cubic metres of material at the site and it’s not believed the stockpile of material had an impact on the slide.

When the gravel pit permit was issued, the Ministry did not require the operator to do a study on slope stability.

Time to stop for a moment and look at this:

“…When the gravel pit permit was issued, the Ministry did not require the operator to do a study on slope stability…”

Now this, to me, is odd. Why was a slope stability study not required?

After all, in these 2017 documents from the Peace River Regional districts website regarding this property ( among others) , the instability of the area is specifically mentioned in a letter from 2015 to the former owner that was included with the package when it went before the regional district for zoning:

The gravel pit is where the initial slide started, as detailed in my first post. This photo from Alaska Highway News, shows the pit initially right after the slide. Highlighted is one very large crack where the entire pit slumped significantly right across the site, and another large crack beginning to radiate into the site. 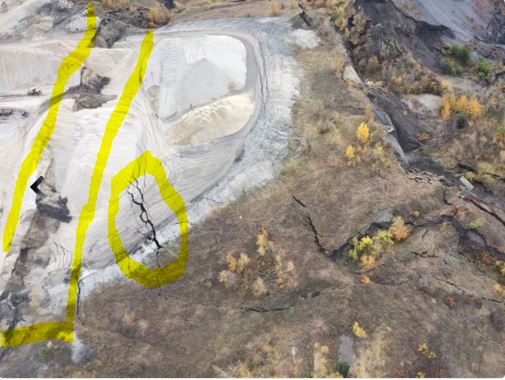 Sources indicated to me in my first post, that a rock crusher had been running on site prior to the slide, which is normal for any gravel pit operation but does create ground vibration. One can see large piles to the front of that property.

Questions I submitted to the PRRD yesterday during the live stream were not all answered and I have not heard anything to explain this yet.

1)If the ministry previously recognized the geotechnical instability of the pit area in their own previous letter, why did the ministry subsequently not require a slope stability study in a new mine plan, as required in that earlier letter, before issuing this new permit?

2) Furthermore, if the PRRD’s own document package includes this letter and the ministries requirements for any future owner, did the PRRD staff follow up with the new owner to ensure these requirements were met? This pit is operating within the districts coverage.

Also of note from yesterdays meeting was the Ministry rep Adrian Pooley taking questions on this permit, of which he seemed to have no definitive answers. Residents spoke up stating they reported a slide by the site back in July, the ministry had no knowledge of this. Did PRRD?

(The Application for the permit was done in late June, so the timing of the slide residents at the meeting state they reported in early July  is important to note) See this ad placed in the paper of that application for reference:

No matter how you look at it, both the Ministry of Mines and the Peace River Regional District have some difficult questions to answer here and residents deserve answers.  Two separate sources indicate ( but not confirmed with owners) that gravel on site was to service existing clients including a gas well, not Site C.

One other aspect to consider, could construction activities, vibrations or the massive excavation of the now infamously problematic north slope I have reported on many times,have contributed in any way to what geologists are calling a deep seated failure?

Which leads me to the question everyone is asking, why isn’t site C evacuated?

The staff at yesterday’s meeting stated that movement was minimal on site C property and that ‘hydro was not concerned’. This may very well be quite accurate, but anything that comes from BC Hydro is to be taken with a MASSIVE grain of salt, particularly with my past experience in reporting on Site C.

Like every govt ministry I have dealt with, they deny, negate and when its proven my sources are correct, they downplay. That being said, these slides are still occurring outside the site c property fence ( approx. 2 kms ) from the actual north side dam construction upstream. This is why residents were being ferried to the site C dock upon evacuation.

This is also a pertinent time to remind readers of why many will continue to say everything is fine at Site C, and even champion the dam being built on shale,even if in fact it was more of a cluster*uck than it has been through these early stages:

Professional engineer John Nunn is one of the new board members appointed by the NDP in January. Nunn’s board bio on BC Hydro’s website describes him as an “engineer with over 40 years of Canadian and international experience in hydroelectric and water storage projects.”

What the bio doesn’t say is that Nunn was the chief project engineer for the Site C dam on B.C.’s Peace River, working for the engineering and consulting firm Klohn Crippen Berger, a Vancouver-based company that currently holds a contract, along with SNC Lavalin, for “design services” on the Site C dam project, according to BC Hydro.

According to Klohn Crippen Berger’s website, the company has provided “comprehensive engineering and support service since the earliest days of the Site C project.”

These include a 2005 assessment of design issues that “could affect the project cost” — then pegged at about $2 billion — and comprehensive engineering and consulting work services from 2009 to 2014, such as an acid rock drainage and metal leachate management plan.

“It would look very suspicious if these new board members were there and new contracts were awarded to their old companies,” Brander said in an interview. “That’s an obvious conflict.”

Brander also said it is not unusual for new governments to leave crown corporation board members in place and that generally there is not a lot of turnover on these boards following the installation of a new government.

But he expressed concern that companies that donated to the BC Liberals — Klohn Crippen Berger, for example — received Site C dam and other BC Hydro contracts, saying “I don’t like the scenario of making donations and getting contracts.”

Sigh. ( Nunn was quoted once here: ” Site C came out ahead, he said, adding that it was also an excellent site for topographic and geological reasons with access to gravel for construction.” ) Did he see the Weisgarber report we’ve been writing about here over the years, several times, sent by Arthur Hadland to everyone in govt, referenced yet again in the first of these posts?

I’ll keep updating and adding links as this story develops. Today the temporary permits officials asked residents to fill out, have been suspended as the slide is still far too unstable. An excellent photo gallery can be found at this link, below the main story https://www.alaskahighwaynews.ca/fort-st-john/old-fort-landslide-expected-to-worsen-as-winter-approaches-1.23456397\

And again, if you have not read the first post on this, please do so here, and take a moment in the comments section too: https://lailayuile.com/2018/10/01/if-the-land-falls-down-around-site-c-does-anyone-in-victoria-hear/ **

47 thoughts on “Part II: If the land falls down around Site C, does anyone in Victoria hear?”