At long last the rains have returned to my portion of the island – for now at least – and since I am sequestered at home today with a child contagious with either strep or mono, I find myself with a bit of rare time on my hands. Usually I am hesitant to say goodbye to summer, but this year I find the welcome cool nights and shorter days soothing after such a long, drought plagued year.

I have a few things that have been on my mind, so let’s get to it, starting with…

Over the summer I have received a few sets of photos to update on Site C, but my focus was on a family member  seriously ill in hospital so was unable to post. I thought I would wait until the long over due April-June 2019 Site C quarterly report to the BCUC was issued, but based on what I have seen and been told, that report will require a post of its own.

As many know, work is carrying on at the site with the diversion tunnels and they are beginning to create the foundations for the dam itself. Which is going to be attached to a buttress on the problematic north slope I have visually documented here for years.

The latest pics ( these already found their way to social media but worthy of posting here as well for posterity) again show evidence of water seeping through the north slope. It’s not something that can be hidden in photos- the gravel seams are high in iron, and when water seeps through this material, it picks up the iron which then rusts when exposed to air. These are the orange streaks seen on the banks in the photos below. 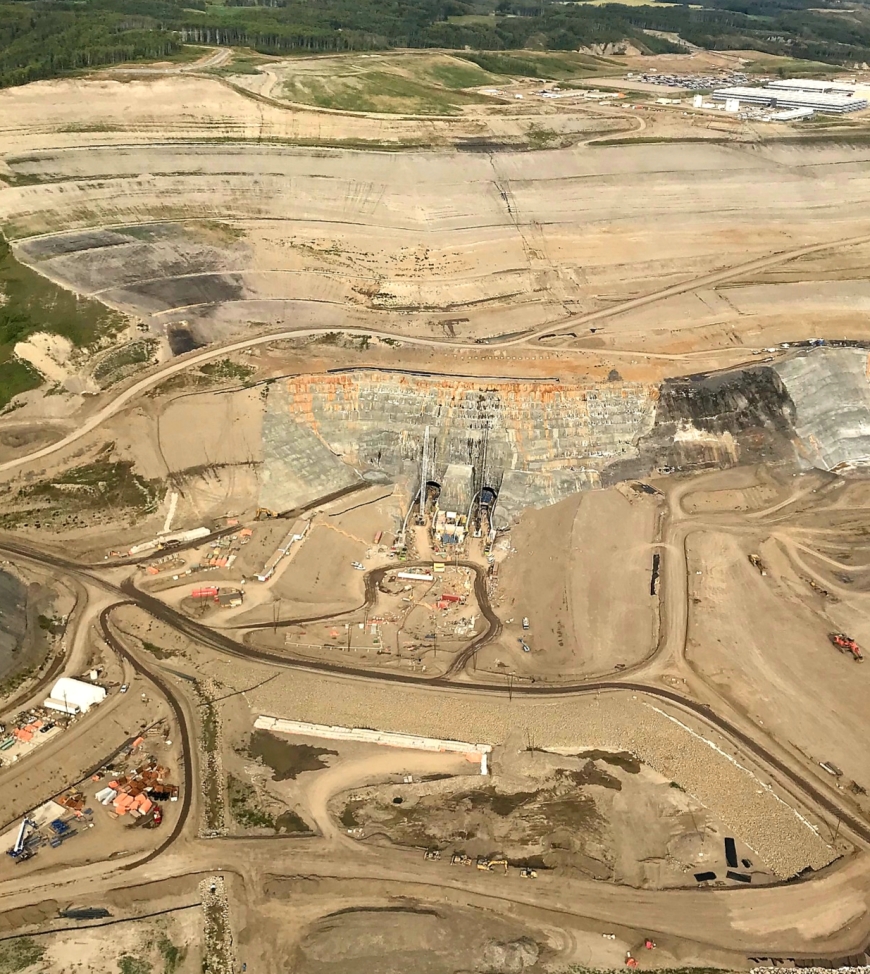 That gravel seam runs the entire length of the north bank, and as I detailed earlier this summer here, acts like a wick, or a drainage channel for water within the bank. Its quite evident that the concrete slurry they are coating the bank with to stop erosion isn’t stopping water from leaching and the heaviest amount of water seepage appears on photo 3, which is the north axis of the actual dam wall itself. There is no way that ‘shotcrete’ will hold up when frost hits, freezes that water and the ice expands in every crack. I also wonder what will happen when the reservoir is filled if the banks slough into the water, exposing the gravel seam underwater. Will it follow the seam along the bank like my french drain takes water out of my yard?

I’ll say this again: Horgan will never stop this dam and one day we will be having an inquiry in BC as to why it was such a boondoggle, like they have with Muskrat Falls. I look forward then, to hearing Horgan explain why he continued like Dwight Ball had to. Continuing to post these updates now, acts as a record  of facts and is the only way we can keep things accountable. It is impossible to maintain costs and the budget under these circumstances. Particularly when I receive emails like this, from a trusted source who has assisted me on stories about other major project, but who disagrees with me on site C:

Let me start with…I’m not against the Site C project.
However…there are safety issues.
Friends of mine work there.
Workplace accidents large and small are rampant.
Eg….a large haul truck hitting a parked articulating truck/ rock truck/ wiggle wagon.
Cause…. cocaine impairment.
Or…large haul truck dumps load in wrong pile…panics ..then drives with the box UP…and crashes into overhead conveyor belt.
Or.. workers, truck drivers, and excavator are getting hired for top pay… And then sitting around all day because management is disorganized..and can’t get asses into seats…to move dirt.
Good supervisors don’t last…most quit on first shift because of the chaotic management…so then the C- minus guys take over.
So…who is minding the store on the accident trends…and who is overseeing the dollars spent vs production? Will need to sidestep the corporate mantra of ” on time and on budget”

Based on the worksafe portion of the last quarterly report, I’d say his warning is to be heeded. The nature of some of the worksafe issues were boggling (like not having a method of keeping track who was in or out of the tunnels). And did I mention this?

The curious case of Dock Currie

It’s been a helluva interesting start to the federal election from what little I have seen… Justin Trudeaus media bus hit the Liberal campaign plane ( the irony of it all, since LPC members blame the media for everything ), Scheer’s faux poverty schtick is being fact checked, and the Greens seem to be self immolating… ( not so sure the ‘ not a war room fast response team’ thing is actually helping them)

And then I saw this…. https://www.cbc.ca/news/canada/british-columbia/second-ndp-candidate-kamloops-riding-steps-down-1.5279583

The NDP campaign this election seems to be a train wreck and I haven’t paid attention enough to say why I think that might be. It’s sad because they have some exceptional candidates. But when I saw the reason Currie was asked to step down was over an interaction with pro pipeline people in which he said something about wanting to punch one of them, it didn’t surprise me, in fact I wondered why all the other stuff he said and did on twitter wasn’t mentioned.

Anyone who was or has been active on twitter in the #BCpoli stream, particularly during the 2017 provincial election, knows how nasty Curries interactions were with anyone he disagreed with. He attacked site C opponents who didn’t believe Horgan would stop it, allies working to defeat Clark, BC Greens, Green supporters, and I found myself on the receiving end of a very aggressive and vulgar attack once or twice where other twitter users stepped in to intervene. This was not an occasional, flippant instance as the pro pipeline incident is being portrayed, aggressive behavior was routine for him.

Curious as to why all those tweets weren’t mentioned ( or how they just picked those two as the worst), I went to twitter to search specific terms and instances I recalled well ( you can do this without a twitter account) and found most tweets have been scrubbed from his account. In some cases when searching specific terms, the replies to them remain which give an idea of the original content that is now gone, like this one:

I asked another user to look who remembered all this as well, with no luck. In fact much of 2016/2017 content is gone.

I don’t think everything one says or tweets should be held against a potential candidate if it is shown to be a rare or exceptional instance ( unless its violent, racist, bigoted). People change, learn and grow as we age and gain more life experience and I do hope Currie has in fact left those days behind, because that kind of interaction has no place in politics, regardless if you are left, right or in between. But when it’s not a rare instance then excusing those actions gives a voice for others to do so with no consequence. That wasn’t passion. That was hostility and there is a vast difference.

Therein lies the lesson for partisans involved in this federal election. Acting like an aggressive jerk on social media pushes people out of the process. You do not need to call names, threaten, be misogynistic or vile to get your point across or debate. It doesn’t help your cause, any cause. Many will disagree with me, but remember how this all looks to average people who aren’t poli geeks. Debate passionately, heartily, factually. Leave the nastiness out of it.

I saw something pass by my feed that made me chuckle today: 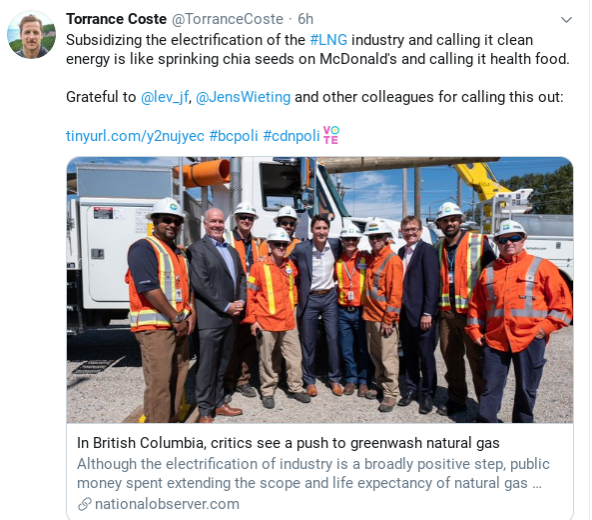 I couldn’t have said it better myself.  The article he links to, can be read here and I too am glad to see this calling out of the NDP’s continuance of BC Liberal policy and direction. https://www.nationalobserver.com/2019/09/11/analysis/british-columbia-critics-see-push-greenwash-natural-gas

If one had a crystal ball and could see 10 or 15 years down the road, I wonder who will have been standing on the right side of history? Those heavily subsidizing LNG shipments to Asia with ever falling royalties being paid to government coffers ( Norm Farrell has done so much excellent work on the continuing debacle)… or those who advocated, pushed and forged ahead with solar projects? https://www.forbes.com/sites/jeffmcmahon/2019/07/01/new-solar–battery-price-crushes-fossil-fuels-buries-nuclear/#217992415971

Last but not least I leave you with…

The state of forestry in BC

In one line? It’s a mess. And to be brutally honest it’s been a mess for as long as I have been blogging and probably longer. Those of us who actually followed forest policy when the BC Liberals were in power, remember exactly how nearsighted forest policy was under their leadership, and how long they were warned it wasn’t sustainable.  That’s why anytime I hear or see a BC Liberal MLA trying to grandstand on this issue talking about the NDP have neglected this, I shake my head and cringe.

Not. One. BC Liberal. Has any credibility on this issue, because nearly everyone of them was in power during the time we had in BC to actually create a sustainable plan when the pine beetle crisis first started. I am from the north and I have seen the vast endless swaths of dead trees firsthand. It made me cry the first time I was up by Babine lake when the trees were standing dead, or clear cut where cuts had started. Seriously, Bob Simpson is the most accurate person on this issue in BC, and this letter he penned is factual and accurate. https://www.quesnelobserver.com/opinion/letter-to-the-editor-forest-sector-crisis-could-have-been-planned-for/

So now that we have determined that if you have a Liberal MLA, you need to ask them about Bob’s letter and why they didn’t plan then, let’s talk about the NDP. Why are they continuing on many fronts, to allow unsustainable forest practices to continue, and why, since they have been in power for 2 years now, didn’t they begin to create and utilize a transition place immediately? They knew what was coming, they sat in opposition watching this happen. I blogged about this back in May in an open letter to John Horgan.

I know a lot of people out of work now in BC. It’s not their fault no one in government planned a sustainable future for this. The focus must now be on a transition path to second and third growth industry, and assistance to retrain if needed.

That’s the issue with so much time between posts, I end up having more to say than I anticipate when I start!!  Fall is coming and another group of geese has just gone over to the  salt marsh, honking their arrival in formation. And I think of Mary Olivers poem and how that’s just the perfect end to this post. Enjoy the last of summer or beginning of autumn,depending on where you are. I have a feeling winter will be wicked here on the island this year…

You do not have to be good.

You do not have to walk on your knees

for a hundred miles through the desert, repenting.

You only have to let the soft animal of your body

love what it loves.

Tell me about despair, yours, and I will tell you mine.

Meanwhile the world goes on.

Meanwhile the sun and the clear pebbles of the rain

are moving across the landscapes,

over the prairies and the deep trees,

the mountains and the rivers.

Meanwhile the wild geese, high in the clean blue air,

Whoever you are, no matter how lonely,

the world offers itself to your imagination,

calls to you like the wild geese, harsh and exciting—

over and over announcing your place

in the family of things.

26 thoughts on “Rainy day thoughts from the island”