One of the first things off my twitter feed this morning was Vaughn Palmers tweet linking to  Times Colonist editor in Chief, David Obee, and his column on the double standard being applied to poor Ms. Clark.

I’m still shaking my head. Here is an excerpt but please do read the entire column:

“Last Thursday, for some reason, Clark found herself on an FM station in Courtenay. About 90 seconds into the conversation, the radio dude said the following:

That’s not what Andrew from Comox had in mind.

A short interview with a radio station in the Comox Valley would normally be forgotten before it ended, but bloggers and political observers are doing all they can to ensure that this one stays alive.

Clark’s answer is being cited as yet more proof that she degrades women, that she is an embarrassment to women, and so on. That two-sentence exchange has, it seems, given the Clark-haters enough fuel to carry them well into the new year.

Personally, I think she did the best she could with an unexpected, inappropriate, insulting, stupid question. She answered it quickly and moved on.

That’s not good enough for the critics, who have had time — something Clark did not have — to think of all sorts of things that Clark could have said or done.

But all of those suggestions are irrelevant. For those who hate Clark, the question was just about perfect. No matter how she answered, she could be raked over the coals for saying or doing the wrong thing. There is no answer that would have satisfied all the critics.

It all gets back to the cold reality facing women in politics: The double standard is still alive.”

Ahhh… where to begin?

How about with the fact that I do agree with David’s opening statement :  “It would be nice to think that by now, politicians, male or female, could be judged on their abilities, their vision, their values and so on. Gender should not be a factor.”

Yes, for most people, gender has nothing to do with the intrinsic qualities we seek in politicians or any other positions of public trust. For myself, the candidate with integrity, values, passion and a solid background will come first, regardless of gender, which is why I still have a such an issue with the NDP’s “gender quota” policy.

However, Christy Clark has not been relying on her values, integrity or her abilities… most of which are questionable at best, considering her policy moves and actions in the premiers office.  Unfortunately for Clark, she has set the standard for herself like no other female politician I can recall now or  in history. 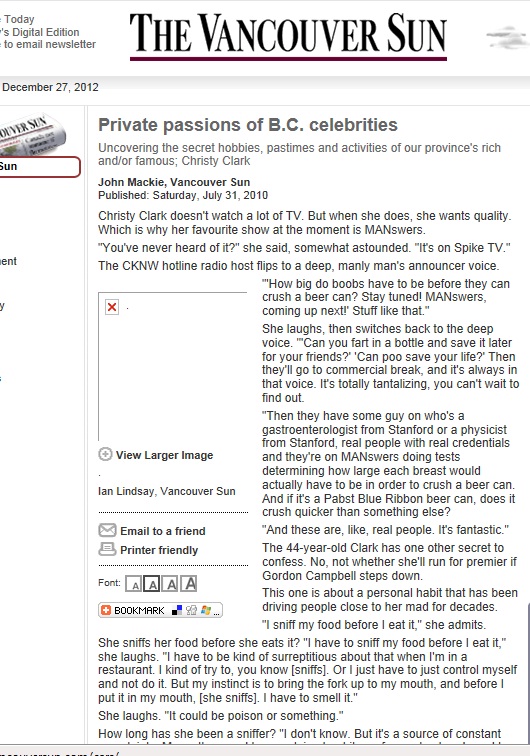 Let’s go back to her Radio talk show days. The days when she would hang out with the jocks from The Fox and Rock 101 and talk innuendo and potty talk. The days when she gave interviews to the guys in the sports section of the Vancouver Sun about her private passions, one of which happened to be one of the most degrading, vulgar shows on TV – Manswers.

You can click on the photo to the left if you need proof, but from her own mouth, she thought it was tantalizing to find out how large breasts would actually have to be to crush a beer can, and that, like, “these are, like, real people. It’s fantastic.”

On a side note, it wouldn’t be honest to claim we don’t all have a guilty pleasure or two, but more than likely we aren’t going to share that with the readers of the Vancouver Sun, especially if we were even remotely thinking about a career as premier. But to say this wasn’t a candid look at the now, still un-elected premiers inner workings, is to ignore what most men and women think about this show. I’m not a prude, and we’re all adults here, but this show is nothing but trash TV. Trash TV that degrades womens, portrays them as nothing but sexual objects, with a large load of potty talk features involving piss, poo,farts and everything else attractive to the beer bong demographic.

And people are attacking the radio host for an insulting ,vulgar and inappropriate question ? On a radio station much like The Fox, or Rock 101, both of which she has shown her sense of humour on in the past, documented in sound bytes and photos for the world to see?

Give me a break.

First of all, the premier didn’t “find herself” without a clue on this radio show, it was arranged by Maclean Kay,one of the premiers communications people, who had been shopping her around for good press as David points out, tends to be done at this time of the year. The station came to her, as the radio host in question pointed out here on my site.

One look at the station’s site is going to tell anyone, even my 4-year-old, that its rock radio, with personalities like ‘Drex’ and “the RockDawg”… so what the heck was she, or her people, expecting? Seriously, let’s be real here, she used to hang with Rock 101 and The Fox, so why wouldn’t the morning jock think he could pass off a stupid question to her? He even said he knew from her days in radio, she had a sense of humour. As I’ve shown above, and as many people in radio here know, she’s set the standard for what she thinks is funny already.

Secondly, David states in the quote above :

“Personally, I think she did the best she could with an unexpected, inappropriate, insulting, stupid question. She answered it quickly and moved on.

That’s not good enough for the critics, who have had time — something Clark did not have — to think of all sorts of things that Clark could have said or done.”

Yes, David, she sure did answer it quickly…. with the worst answer a politician could have come up with male or female. I have been one of her harshest critics, focussing most often on her lack of ability blatantly displayed in interviews across the country, her reactionary policy/decision-making and the chameleon like insincere remodeling of her persona dependant on the media attention at the time.

David, I am appalled that you think she handled this appropriately, and take offense to your statement that her critics have  had more time to think of responses. How about “That’s not appropriate for families listening Drex.” or ” I find that insulting, lets move on.” or even the short simple and sweet…. “Next!”  – all of which came to my mind immediately and are responses suitable for airplay.

Nope, it was the premier who laughed, and said she considered it a compliment… “Thank you! ”  Let’s have a some accountability here.

The only cold reality here is that no other female politician I can think of in BC, would

2) have inspired such a question in the first place

3) have answered that question with the statement Clark did.

It escapes none of her critics, nor myself, that while Clark handled Richard Branson’s invite to kite surf naked on his back with a sharp jab and these quotes in the Vancouver Sun…

” I didn’t think it was very respectful,” Clark told reporters in Victoria Tuesday.

“Lots of young women I hope want to run for politics,” she added.

“I think when you meet with the CEO of a billion dollar company who wants to do business with your province, you can get a little bit more respectful treatment than that.”

And it was only pulled down when someone realised it was quickly reaching viral proportions.  Corporate pressure.

Kind of a double standard, if you ask me.

Let’s be real here and not play the gender double standard card.

There are quite a few female politicians in BC, many considered very attractive, most mothers, and none of them have ever been the recipient of these kind of sexual innuendo, or even been commented on like this.  Lana Popham springs to mind first, a stunning beauty yes, but her brains, vision and dedication to her job in this province all come before that attractiveness as qualities of leadership. It wouldn’t even occur to any radio host to ask her such a question.

Christy Clark has been now the subject of very overt sexual comments not once, but twice.  Once making news internationally.  Why is that?

Maybe because Clark has done nothing to show voters her abilities, her vision, or her intellect, but she’s done everything to show them that she will say, do or even become anything she thinks will get her a vote….

…..because in her heart, in her heart…. she’s a filipina…she’s south asian…she’s a wounded, sweeping Vancouverite getting over the hockey riots… she’s a devout Anglican who looks to the Bible for guidance in her decisions…

And while David Obee is certainly entitled to his own opinion… it isn’t Christy’s appearance, or her breasts that have degraded women, it is what comes out of her mouth.

For women aspiring to politics, it is not only degrading and frustrating, but embarrassing to boot.

** Readers can read the first post on this here, when I first broke the story December 20th, following a tip from a friend in Powell River.

** The Province has waded into the debate now, with a comment on the Premiers answer from her spokesperson, Mike Morton, and my comments from an interview with Cassidy Olivier earlier today. http://www.theprovince.com/news/Premier+Christy+Clark+tells+radio+audience+better+MILF+than+cougar/7750003/story.html

115 thoughts on “(updated ) How Christy Clark set the standard for vulgar questions and innuendo – a rebuttal to David Obee, Editor in Chief of the Times Colonist.”