About those WAC Bennett Dam repairs… 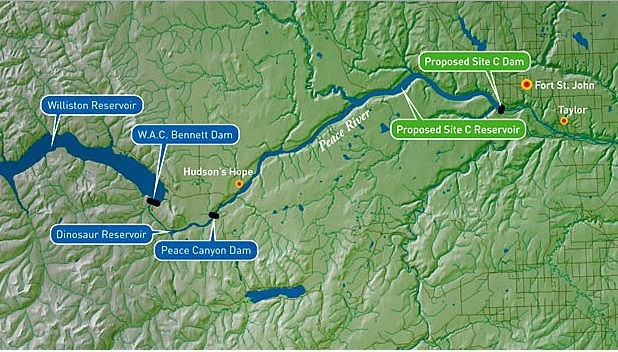 Back in November, I saw a notice in the paper about a BC Hydro application to the BC Utilities Commission for rip-rap repairs on the WAC Bennett Dam, and blogged about the complete and utter hypocrisy of this in relation to the Site C dam exemption: https://lailayuile.com/2015/11/30/a-river-runs-through-it-the-hypocrisy-that-is/

But as the province continued to move full steam ahead on Site C, a multi billion dollar project the government exempted from that very same process required to do repairs on the WAC Bennett dam, something just didn’t feel right. I couldn’t put my finger on it but something brought me back to take another look at those Bennett Dam repairs.

What I found was stunning in my opinion, and had received very little press other than a story in the Globe and Mail shortly before Christmas 2015-from the looks of the response to that,few had even noticed it. That lead me back to the BC Utilities Commission for another look at the documents being presented by Hydro during this regulatory review and what I found, was concerning for several reasons: https://lailayuile.com/2016/03/10/bc-hydro-responses-to-bc-utilities-commission-raises-new-questions-over-wac-bennett-dam-repairs/

The repairs were in fact extensive and long overdue. 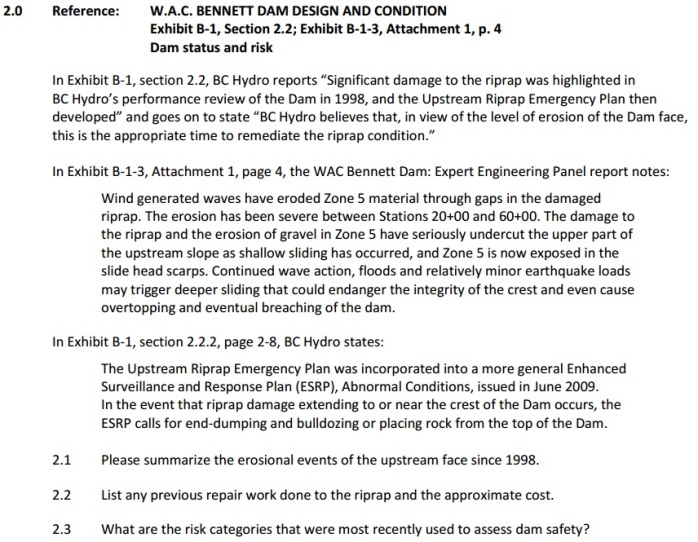 To me it seems a very calculated risk to have allowed these conditions identified in 1998, to have gone so long- particularly when you consider the new questions raised by the utilities commission with respect to two other issues identified by the experts that had not been addressed yet.

The BC Utilities Commission had more questions for BC Hydro following that last round of questions and last week BC Hydro’s response was submitted- this is the full response package from BC Hydro that I will summarize below :

The response is long, but includes a follow up report from the same expert review panel – completed in March of this year – that identified the conditions,concerns and risks back in 2012. The panel made a number of recommendations to BC Hydro at that time including the following- it is point 5 that the BC Utilities Commission has been asking about: 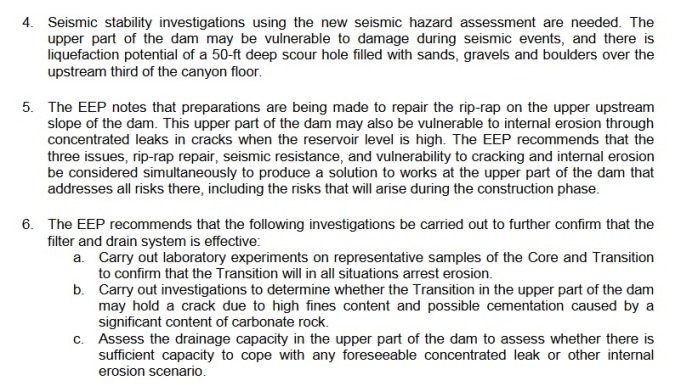 Points of interest from the review panel:

Documents have been issued which will lead to the appointment of a contractor to complete the repairs to the rock face over three seasons when water level is low. The possibility exists that stripping the rip-rap may destabilize the upper slopes and measures must be in place to address this situation

The Sonar survey has identified two interesting features, one which looks like a shallow landslide on the upstream slope of the embankment below the rip rap; and another localised depression near where the embankment abuts the canyon wall. The reasons for these are being investigated by BC Hydro
Pg 46: 5.3 Monitoring Measurements at Sinkhole #1
There is a large number of monitoring installations and instruments in Sinkhole 1 and in the immediate vicinity of the sinkhole. The diameter of the heavily disturbed column of soil down to about 100-ft is estimated to be about 10-ft, and there is more or less disturbed material in a circular column 26ft in diameter.The sinkhole goes deeper than that, but the estimated diameter is significantly smaller.
Not all of the local instrumentation is essential or very useful, and BC Hydro is reviewing the situation.A review is especially important at this time when plans are being made for the required construction work related to new layer of riprap to be placed on the upstream side of the dam. Heavy equipment,transportation and construction work will affect the monitoring activities at Sinkhole 1, and the instruments considered valuable for future monitoring must be protected to remain functional.
A draft of an Inter-Office Memo (dated 18 November 2015) was made available to the EEP during the present meeting. The EEP has not had the time to study the Memo, but it seems to give a detailed review and analysis of the situation and the possible actions to be taken.
Pg 48: Summary of Conclusions and Recommendations

-The upper part of the dam is vulnerable to deformation and transverse cracking under seismic loads, in particular in the areas affected by the two sinkholes, and is also vulnerable to seismic loads at the Spillway-Embankment interface

-there is a low likelihood that given the earthquake occurs the induced cracks in the top of the dam will penetrate as deep as to full supply level where the dam is very wide. However as discussed in Section 3.4.3 the deformations  and cracking are difficult to model because of the complex 3D geometry and the difficulty in modelling the pore pressure build up and loss of stiffness in the loosened fill around Sinkhole #1 under seismic  loading.

– The EEP is concerned that the time for development of internal erosion from initiation to breach has been overestimated in a number of PFM,  ( Performance Failure Models) and that in reality, concentrated leak erosion may  develop in hours or days, not months and years as assumed. This may have important implications for how the risks are managed.

– The EEP made a number of recommendations for BC Hydro to further investigate  certain technical matters as well as reminders for earlier recommendations made in 2012, that Hydro has not yet completed.
Long story short, BC Hydro must now use a ‘risk-informed’ approach to doing further upgrades or repairs, something the BC Utilities Commission has questioned with regards to the vulnerability to the upper portion of the dam. And at this point in time there is further testing to be done before any decisions are made regarding possible remediation: 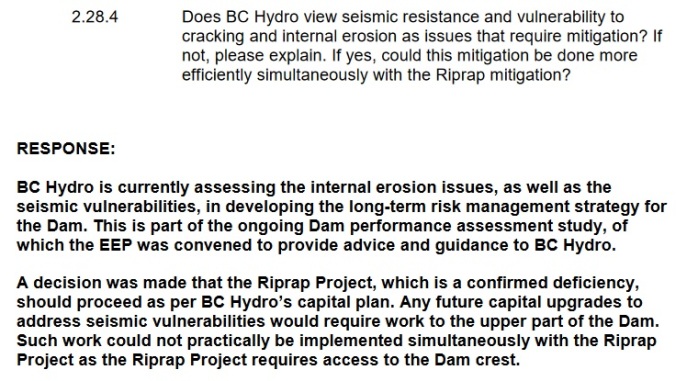 It’s all fine and dandy, but the question remains why these situations have been left so long by BC Hydro before being investigated and acted on,particularly since we know now that fracking causes earthquakes in northeastern BC.The documentation clearly shows these issues were identified as far back as 1998. And the extensive and pertinent questions of the BC Utilities Commission clearly show the value of their work in reviewing Hydro projects, which is why it remains a travesty that Site C was exempted.

The people of BC will never have the security these reviews offer as the only check and balance to BC Hydro. As Premier Clark forges ahead to get Site C past the point of no return, even contracting turbines before ground has broken, WAC Bennett dam sits waiting for repairs even as BC Hydro gets ready to borrow more money to pay the government dividends…

Kind of makes you wonder how effective & visionary the decision making at BC Hydro really is, doesn’t it? And why the Energy Minister Bill Bennett and Premier Clark would  applaud such fiscal irresponsibility at all.

13 Comments on “About those WAC Bennett Dam repairs…”