***UPDATED WITH Sandy Garossino’s new piece at the bottom. Must. Read.***

It’s the Friday of a long weekend and while BC liberal leader Andrew Wilkinson embarrassingly tries to deflect attention in the face of the Peter German report, key figure Rich Coleman is nowhere to be found.

Likewise, Susan Anton and Mike DeJong are notably ‘busy’, all no doubt praying that this all dies down after Canada Day festivities and summer vacations start.

Bolstering their hopes is the apparent hesitance of Eby to call for a public inquiry-the language of both German and Eby in the presser spoke of  ‘looking forward’…no mention of inquiry or commission.

That didn’t sit well with me and clearly Sandy Garossino feels the same way.

Her bold tweet thread spells out why Eby – and all of you – must not let this go. Her points are succinct,pointed and worthy of sharing far and wide.

Why did he mislead the public in smearing an RCMP inspector warning of money-laundering?

Why did he disband IIGET weeks after they warned of the same? 1/#bcpoli https://t.co/Iqn5bZBYce

What about BCLC board chair Bud Smith (who quietly departed last month)?

He’s a lawyer & former AG, in charge of criminal prosecutions. He knew the threat of org crime, & took over the chair in 2012, when BCLC had already been fined.

And then things got much worse. 2/

Where is fmr CEO Michael Graydon, who made a king’s ransom of taxpayer dollars at #BCLC.

Where is Jim Lightbody, who said in 2015 that the co was targeting exactly the market segment now known for money-laundering?

All were paid by us. They should answer to us. 4/ #bcpoli

This wasn’t just a turf war between enforcement arms, or a systemic breakdown, or an “unwitting” accident.

There were people in charge who made decisions that defied every principle of prudent governance, and their public duty. 5/ #bcpoli

These are or were our public representatives, employees & appointees.

Not good enough to be unavailable, @colemancountry.

You answer to the people of BC, who’ve paid your salary for 22 years.

To @Dave_eby: the German report is an excellent start, but an absurd finish.

This ain’t over—the job’s not done yet. The public wants answers under oath at a public inquiry with enough teeth to root out the truth.

Time for a Charbonneau Commission here in BC. Fin. #bcpoli

Shd go beyond money-laundering & look at broad issues: how did the BCLC board chair chair buy shares in Paragon while sitting on the board?

Which then bought Edgewater Casino out of bankruptcy. Then got major govt contract.

Yes. This. All of it and more.

A friend in law remarked that there is a good reason so many BC Liberals are saying so little right now. Should an inquiry be called,everything they say has the potential to be used down the road.

The extent of the corruption revealed by the Charbonneau Commission was stunning – here is a look at highlights from key witnesses: http://montrealgazette.com/news/local-news/montreals-charbonneau-commission-what-the-witnesses-said-and-where-they-are-now

Like an old dam weakened by many small cracks, once the admissions started leaking nothing could hold back the flood.

And BC has the distinct advantage of learning key lessons from Charbonneau to ensure a tight,effective mandate.  https://www.thestar.com/news/canada/2015/11/26/charbonneau-commission-holds-lesson-for-other-public-inquiries-hbert.html

” Ultimately, the Charbonneau’s commission best accomplished its mission on the front of public awareness. Its hearings vividly illustrated the toll that corruption and collusion have taken on the province’s public services. And they did demonstrate that the problem was systemic. “

” …the problem was systematic…”

David Eby already knows what needs to be done. He hosted a session on the lessons from Charbonneau last year. 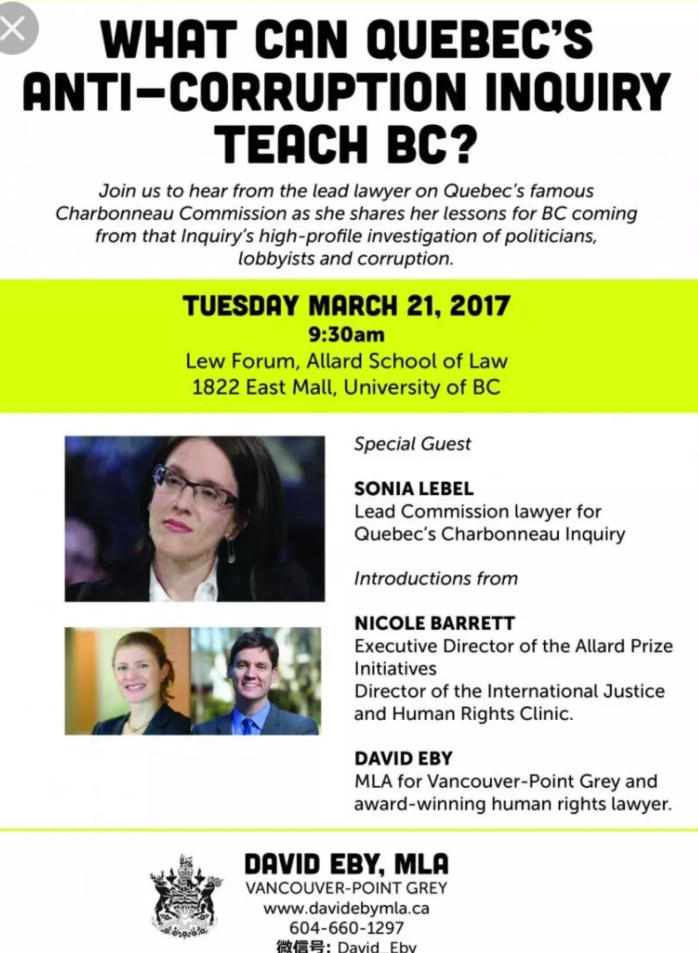 Now he just has to do it.

***An earlier thread by Sandy passed on is a must follow as well: 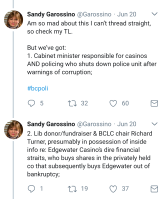 Category: BC conservatives, BC Greens, BC Liberals, BC NDP, BC Politics, Corruption, crime, The China Connection

← “Money and Corruption are ruining the land…” *Updates at the bottom as they arrive*
BC Hydro: the public utility with zero public accountability →