The Billion dollar question with only one right answer.

I was working on some research when I first heard the decision on Site C would come by December 31st, 2017…exactly two years from the day I first started blogging about Site C in earnest. Since then a multitude of opinion editorials, articles and statements have been made by both those opposing and those in support. ( It’s here I’ll mention the only formal group campaigning in support seems to be the Independent Contractors and Businesses Association, spearheaded by rep Jordan Bateman. Yes, that’s the same Jordan Bateman,former taxpayers champion who worried about the costs of Site C )

The BCUC was clear in their final report & for the first time since I have been reporting on Site C, headlines appeared in every paper in BC confirming what we have all been saying all along.

In following Site C, once again what’s proven to be the issue that flips undecided citizens most is cost & debt load. Cost because while people in metro Van can’t see the reality of how big the impact is of a flooded valley, they can see the impact of rising hydro rates on their bills. Debt load because even the most fiscal conservative gets how rising debt at BC Hydro impacts the provinces bottom line.

And now we have a perfect storm thanks to the mismanagement of the former government lead by Christy ‘git er done’ Clark, combined with the political considerations of the new NDP government. Do we move ahead with Site C and all the risks inherent to this project and the provinces finances? Or do we step around the sunk cost fallacy, stop throwing good money after bad and find a different way?

Smart economists will confirm even good business people get stuck in the belief that it’s better to keep going with a bad idea( creating an even bigger,bad investment) than cutting your loss and walking away to avoid that scenario.

I still believe stopping Site C is the only option. And here is why. Horgan will have one big financial mess if he keeps going.

I’ve written extensively about the ongoing slides and efforts to find a way to address what Hydro claimed were unexpected geotechnical problems ( they weren’t unexpected, unless someone is a total idiot & didn’t read any reports). The government has repeatedly ignored their own report commissioned in 1991 that specifically states any development or exploitation of these slopes should be minimized: ( pdf)  Weisgarber report

The problematic left bank, aka North Slope, is where two tension cracks appeared and is where escalating costs will continue to arise from. Why this matters, is because this is the area of one of the anchor points for the dam.

Vaughn Palmer reported on the geotech problems here, months after I had been reporting  with photos on ongoing slides on that slope for much of 2015/2016. 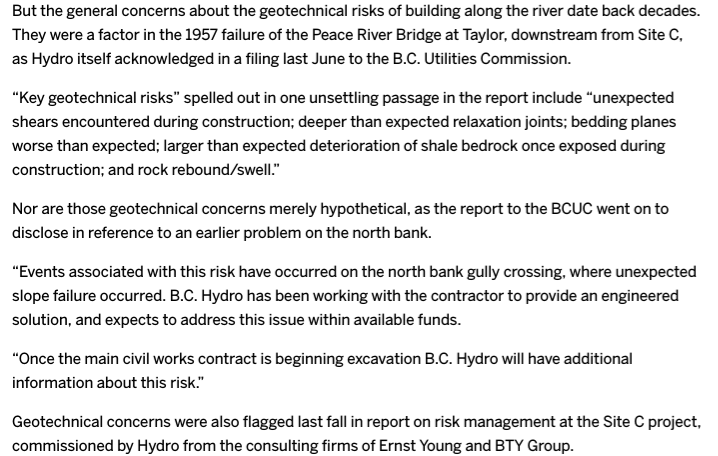 This one aspect alone, the removal of unstable soils sitting on top of unstable shale bedrock, will likely be a key factor in cost escalation on this one portion of the project alone. Here is a page from the 2009 Klohn Crippen Berger report: 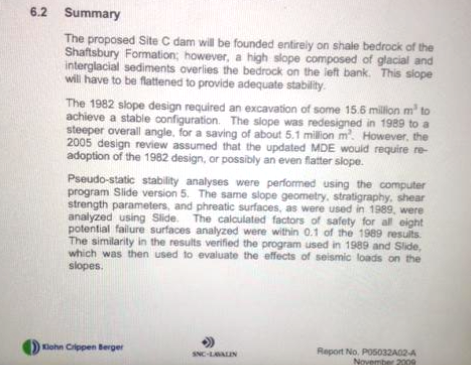 Herein lies a major issue, explained to me by a project manager familiar with the site and these reports.  The 1982 slope design called for estimated 15.6 cubic meters to achieve stability. To save money, the 1989 design used a steeper angle, shaving off  5.1 million cubic meters of excavation. But a 2005 review stated the 1982 design had to be assumed… or even more to achieve a flatter slope for stability.

Fast forward to where we are now and the sheer volume of material already excavated to flatten and round off the unstable slopes has been immense, yet two tension cracks still appeared after innumerable slides throughout 2016. That likely means they will go for  the even flatter slope design referenced above, to try to achieve stability.

Of course, the flatter that anchor point slope gets to try to achieve stability ( truly an unknown factor) ,the more costs go into dam construction in material costs, to account for being anchored to a flatter slope. The dam design is larger. Not only that, the costs relating to hauling massive amounts of material out need to be factored depending on where the material is being dumped. The further away the dump site is, the longer the turnaround time on haul trucks, requiring more trucks to keep to any semblance of a schedule. How much has been removed? How much more would they try?

Here is a look at before and after of that bank since the project started: 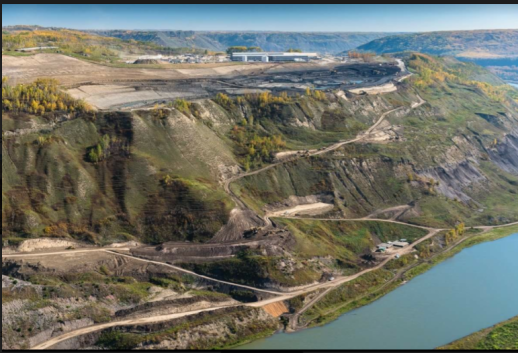 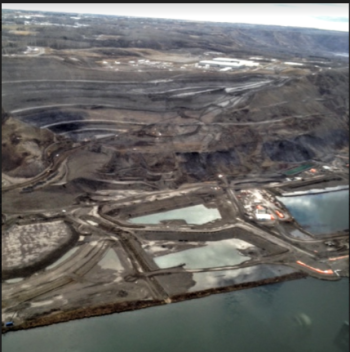 Ca-ching $$$  You get the point and this is still, only one aspect of the entire project that’s  eaten up nearly half the contingency already and has seen one member of the construction design team overseeing the project, go bankrupt.

( Of note, Arthur Hadland, source of much wisdom and relevant materials to the area and project,spoke with a retired engineer who worked on the project back in the 70’s, and this was his comment. There is substantial documentation of surveys done on that bank over the years showing how extensive the movement on the slopes has always been:

“When I worked on this project I supervised a drill that was putting in test holes along the (old) north abutment.  We ran into a sub-vertical open tension crack and lost all drilling water.  It could not be sealed off and we abandoned the hole.  Later I learned the entire bank had collapsed.

There is little that can be done to remediate slopes that have tension cracks and incipient shears on this scale.  What happens is that groundwater moves down the cracks and along more permeable bedding planes.  It has the effect of softening and weakening these layers, which have abundant swelling clay minerals, as you know.  As a result, you end up with a big block of shale sitting on a very slippery surface with no cohesion in the backslope due to the tension cracks.” )

There is another way. And there is a way we address the long term interests of hydro customers, taxpayers, climate and still keep people working in good paying long term jobs, not short term work like Site C.  It’s called Burrard Thermal and even environmentalists have questioned the former governments decision to shut it down,when it provided security for Metro Vancouver supply. 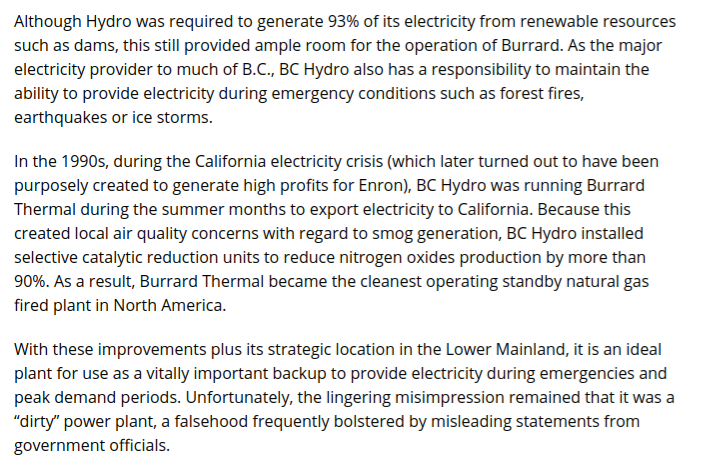 The former government played politics with everything, and hypocritical policies that make no sense fiscally or environmentally are part of what needs badly to be corrected in BC,including Site C :

Say what? It’s bad for us to keep jobs in the north going by using our own natural gas to keep a reliable electricity source in Metro Van, but it’s ok to let industry run wild with it to liquify natural gas in order to export it for foreign markets? Ummm ok.

I’ve put tremendous thought into this, and talked to a lot of people around BC. There is only one way to move forward right now. Bring Burrard Thermal back online if needed, to give security to our grid. We saw last summer how forest fires threatened the grid. It’s a fact we need to deal with. Climate extremes are changing everything. We shouldn’t be flooding this valley.

In the review of Hydro, the NDP needs to look at integrating smaller scale  wind and solar projects into Hydros portfolio, with the knowledge Burrard Thermal is there for back up. It requires no additional infrastructure, with no additional GHG footprint. Tighten up regulations for gas producers to address all environmental considerations.

Remediation of the valley will keep on site workers busy for additional time. Hydro employees will be reassigned to other projects. Bringing Burrard Thermal online ensures local jobs in the gas industry will continue to bring actual business into local communities.

Government should also consider offering incentives to expand agriculture in the area, including offering land accumulated by Hydro at discounted rates to young and interested farmers. Hemp production has been bandied about online with great interest due to long growing days in the north.

This solution is not only workable, it’s the only solution that addresses security and consistency of the power grid, long term job creation and the greater good of taxpayers and hydro customers.

Burrard Thermal provides back up and allows for a clean transition to innovative renewables in BC, as well as providing support if.. and that’s a huge if.. the demand actually materializes. This transition isn’t going to happen overnight and Burrard Thermal will bridge the gap, only needed for peaks or emergencies. I’m shocked Jordan Bateman recently discounted Burrard Thermal in a video for the ICBA, particularly after calling everyone job killers. Why Site C when this is right there? Amend the Clean Energy Act so it actually makes sense.

It’s a fact that Hydro rates will increase no matter what the new government decides.  They have to because of how bad of financial shape BC Hydro is in – that’s what the Liberal MLA’s whining about rate increases haven’t been telling you. But the potential of $10 billion plus of debt from Site C, on top of the crippling debt BC Hydro already has, will absolutely increase rates far more than what stopping the project ever will. What amazes me still are the self proclaimed fiscal conservatives who rail on hysterically about how the NDP will drive us into debt…all the while staying silent on a project that could push BC Hydro debt right off the fiscal cliff. Daycare plan? Bad. How are you going to pay for that? Site C? Good. Let’s not talk about 94 years of debt….

It’s a risk no fiscally competant government should take. The BC Liberals and Christy Clark brought us to this point. But everything that happens from this point on, is entirely on the NDP. Will they put the greater good of BC first and stop this dam? Or take the Dwight Ball route,talk about how bad it is then proceed to build and blame the prior government? ( Hint, that didn’t work out so well for Dwight…)

Let the dam die and leave the people of the Peace river valley alone at last. They’ve given enough to BC. It’s our turn now to make sure this is done right. For all of us.