One of the advantages to blogging is the ability to follow up on stories as many times as one needs to get to the bottom of it. And as is becoming more common with stories involving the BC provincial government, it’s a matter of digging deeper,looking beyond the ministry media handler statements and sometimes going back and comparing them to new ones.

Such is the story of everything to do with the Sea to Sky highway, that lovely scenic drive and engineering marvel that takes one out to Squamish and Whistler. Not only scenic, its construction,cost and maintenance has been a source of many stories that give British Columbians a glimpse into how major projects are built and paid for.

Stories like the reason there why will never be a toll on that highway – at least until the current contractual obligations are paid out. The hidden shadow toll is based on vehicle usage counts and distance, and is included as a part of the total payment to the concessionaire ( the private partners the government must pay back every month for footing the bill of the construction) If you are a newer reader, you can find all those stories on my Best Of page, just over half way down : https://lailayuile.com/best-of/

Another story that has been just as compelling for me because of the potential implications of the research, revolves around the more than 200 retaining walls built along the Sea to Sky highway.

On April 30th, 2014 I broke the story that the Ministry of Transportation was investigating the condition of a series of retaining walls after photos were taken that showed gaps between blocks, seepage outside of drains, blocked drains, and walls that were wavy and in some cases bulging. https://lailayuile.com/2014/04/30/troubling-photos-spark-ministry-of-transportation-inspections-of-sea-to-sky-retaining-walls-creating-new-concerns-over-kiewit-construction/

The ministry responded on  May 1st,2014, that they had done their own investigation and that the issues were all merely cosmetic in nature. http://www.news1130.com/2014/05/01/questions-raised-about-sea-to-sky-highway-structural-integrity/

In November of 2014, it was discovered that Kiewit had inspected their own work as per a Ministry of Transportation Operation managers emails, who advised the ministry was reviewing what Kiewit had discovered.  https://lailayuile.com/2014/11/27/sea-to-sky-retaining-wall-questions-continue-as-internal-emails-indicate-kiewit-inspected-their-own-work/

It was then revealed – not by government but by a resident in the area of the repair – in April,2015 that two other retaining walls on the Sea to Sky highway that showed little to no visible defects, were undergoing extensive repair work. https://lailayuile.com/2015/04/21/extensive-repair-work-planned-for-sea-to-sky-retaining-wall-one-year-after-problems-on-3-others-first-reported-here/

Transportation minister Todd Stone was on the hot seat in the legislature looking nervous that week, but instead of answering any meaningful questions he tried to deny,deflect and discredit the opposition who were finally doing their job well. https://lailayuile.com/2015/04/23/denial-deflect-discredit/

Just days later it was revealed by yet another Ministry of Transportation manager that Kiewit, the builder of the highway, had used substandard materials. https://lailayuile.com/2015/04/25/the-contractor-who-built-the-wall-peter-kiewit-and-sons-used-parts-in-the-retaining-wall-that-do-not-meet-ministry-standards/

Repairs have been ongoing this summer at the Pasco Road rebuild and at the CN rail overpass near Brandywine falls past Squamish, and in both cases the repairs are extensive in scope.  But why such extensive rebuilds?

An FOI  requested and released to someone in the media in August of this year, gives some insight into what went wrong on these two walls in particular. And the results are damning.

A letter dated June 17th,2014 from Hatch Mott McDonald to Sea to Sky highway builder Kiewit,  states that Kiewit flagged those two walls for internal review and testing, after an internal Kiewit audit showed the possibility that deformed wire was used in the walls instead of the contract standard wire. ( pg 98-106 below)

The safety inspection reports also show that despite the Ministries earlier claim in May 2014 that a full investigation had already been undertaken of the walls, the safety inspections were not conducted until October 2014, a full 5 months after I first broke the story.

The FOI package includes  just 12 inspection reports from 2013. In all, most walls were rated well, with several in the fair to poor range for particular components. All the issues identified by the photos posted here previously are noted, including erosion, drainage issues, water seeping between blocks, misaligned blocks, walls built of out line resulting in a wavy formation, bulges of compacted fill walls, a result of over compaction during construction.

Motion sensors also tracked movement on the walls reported here earlier for a period of time and no significant motion was detected.

However, questions remain as to how and why substandard material was used in the construction of the CN wall and the Pasco Road wall, and why it took until this point in time to address it.

Questions also remain as to why walls clearly built out of line and with defects were approved as acceptable for completion, considering the cost of building this highway. This is something I have never been able to get an answer on from the ministry of Transportation but is concerning to me for a couple of reasons.

With industry sources indicating there have already been incidents of spalling under the  new Port Mann ( falling concrete bits and pieces) and geotechnical issues with settlement.soft earth at both the north and south ends, one wonders if  BC’s great transportion projects will suffer the same crumbling fate as those in Montreal.

Calls to the Ministry of Transportation made this morning, were not returned as of the time of this posting. I’m not surprised – I would have hard time explaining how an $800 million plus highway ended up like this too. ( and that doesn’t include the 25 years of PS payments either…) 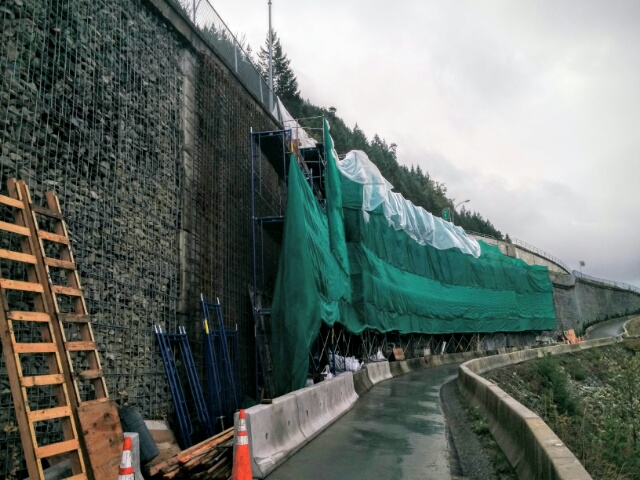 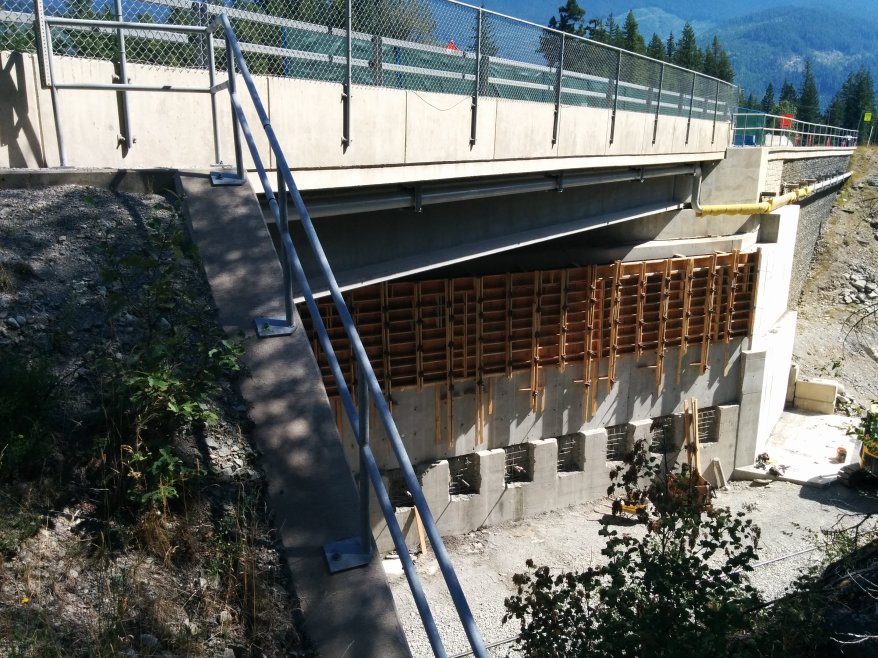