A little funny thing happened on the blog today I thought I’d share because it’s another one of those things many people don’t know about government. They monitor media and not only do they monitor it, they rate it.

I often get incoming links from their daily rounds when a blog post or tweet has caught their attention but when you click on that link it always takes you back to a log-in page so you can’t actually see their list for whatever ministries list you are on.

Today though, something different happened. I clicked back on their incoming link and it took me directly to that page which shows the lists of things they monitored, including a tweet  where I linked to the recent Port Mann bridge story from Integrity BC. This is the link, soon to be dead I’m sure:  http://tno.gov.bc.ca/tno/wapservlet/tno.otis.wapservlet?command=showonbb&key=MTU4MDEyNTc0LnRubw%3D%3Dtno

Since they clearly don’t like the story, I’ll give you the link again ! https://lailayuile.com/2016/05/07/port-mann-bridge-becomes-the-new-fast-ferries-debacle/

You can click on each image for a larger view.

But wait, what are all those red squares? I think it is safe to say they are negative ratings. Gary Mason and I both received -1 red ratings. Clearly, we

A story on the success of a breakfast program for needy hungry children in Vancouver, also rated a -1,likely because it spotlights the extent of child poverty,an ongoing failure for this government.

A story on government inaction on foreign investment earned a -2. And so on.

This is not a new department nor is this news to bloggers and or the media.  It used to be called the Public Affairs Bureau and we bloggers referred to the workers there as PAB-bots 😉  And if the NDP were to form government I can bet that it would continue. It’s how governments stay on top of public reaction to stories involving or impacting government reputation or operations,  and helps them come up with communications strategies to counter bad news or bolster good stories.

Not unlike Clarks announcement of a raise in minimum wage,which I believe was a strategic move to attempt and deflect public attention from the growing outrage over the MCFD review and the news that government has completely botched compliance and enforcement in the mining industry.

They monitor columnists and critics- note all the green squares here, grey appear to be neutral stories:

On a daily basis for every ministry, they do this. And take screen shots of the front pages of newspapers: 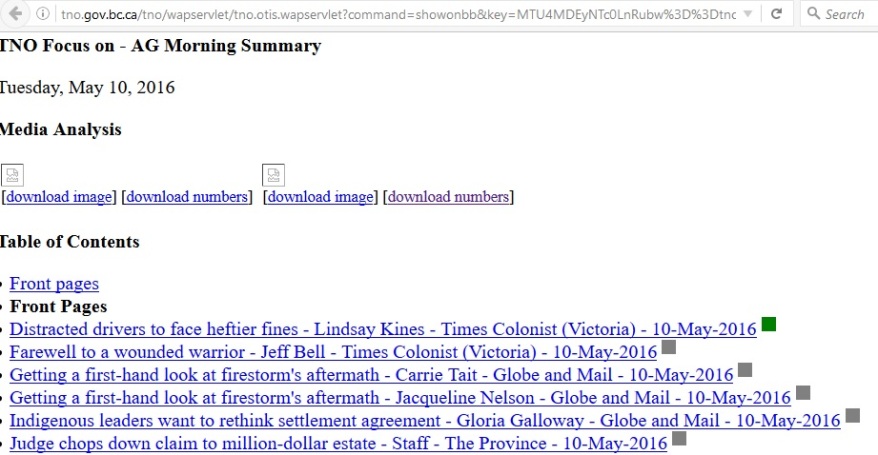 In 2o13, Bob Mackin reported that the government had 225 positions within this ministry with 18 fully dedicated to media monitoring: http://thetyee.ca/Blogs/TheHook/2013/06/18/PRDepartmentGrowing/  ( John Paul Fraser is Deputy Minister http://www2.gov.bc.ca/gov/content/governments/organizational-structure/cabinet/deputy-ministers )

One wonders, with a new scandal every week and more revelations to come, how many people are working in that department right now? And is that the best use of government funds? With technology today, you don’t need 18 people…how many social workers could those wages cover instead?

I’m wondering if they are worried about this story as well,where more is to come:

“So, what does the Sea-to-Sky Highway Improvement Project have in common with Site C?

First, you need to go back to 2005, when Partnerships BC reached an agreement with S2S Transportation Group for the Sea-to-Sky project. S2S was made up of six companies, including Peter Kiewit Sons and the Macquarie Group.

At the time, Frank Margitan was the vice-president of Peter Kiewit Sons and is identified in legal documents as the “Project Manager” for Sea-to-Sky.

In those same documents, Gary Webster is identified as the Province’s Representative, a position that can include approving invoices for payment. Webster was a senior vice-president at CH2M Hill.

Frank went on to retire, albeit he still does some consultancy work from time-to-time and Gary went on to KPMG.

And there it might all have ended, except for one funny little coincidence.

From an October 20, 2014 letter to BC Hydro: “As part of its due diligence process and to support its final investment decision, BC Hydro asked me to engage a panel of industry experts, to undertake an independent review of the direct cost estimate, and provide an opinion regarding its completeness, sufficiency and accuracy.”

Who signed that letter? Frank Margitan.

But you can never be too sure. Never hurts to get a second opinion on the independent panel’s review, the one headed-up by Frank. So off to KPMG.

Here’s part of what KPMG wrote in its December 4, 2014 letter: “The expert panel of construction estimators that independently reviewed the major components of the estimate was again a level of diligence that increases the confidence of the estimate compared with other capital projects…The level of detail of this panel review was comprehensive and was performed by reviewing backup information and interviewing the estimating team.”

Webster also noted in his letter that: “KPMG worked with Partnerships BC to ensure that the approach in assessing and valuing risks on the Site C project was consistent with the standard approach developed and implemented on other Government projects.”

Those would be the projects that consistently come in over budget and behind schedule. Think Evergreen Line.

Webster added: “Based on input from the project team and our experience with other projects adopting a management reserve of at least 5% of the direct costs would be a reasonable practice.”

Sea-to-Sky went over its initial estimate by 29 per cent. We’ve included a table in the IntegrityBC thread comparing initial estimates against actual costs on 18 infrastructure projects.

Oh, and who was on the board of directors of Partnerships BC at the time? Frank Blasetti of Fast Ferries and Port Mann Bridge fame. Really small world.

Now, go click on the link to Integrity BC’s post, read what he has posted in the comments sections there too and think about  that for a bit.They do excellent work,non-stop.

This is why we appreciate readers support so much – we do make a difference. And this proves it. But are  you fine with government spending so much on advertising and media monitoring /communications staff?  In a day and age where an app can do the same thing? And what kind of government rates stories and people like myself who are not technically media?

Maybe if they were more worried about doing the right thing and  creating good policy in the first place, they wouldn’t have to spend so much time and money monitoring…