Breaking news this morning from Newfoundland: the Muskrat Falls dam project is officially a boondoggle, having doubled in price and leaving their hydro CEO to make a shocking admission:

“Muskrat Falls was not the right choice for our province.”

Hear the words straight from his mouth, here:

I’ve written about Muskrat Falls several times, including this warning back in February in which I detailed the similarities in how both the Newfoundland/Labrador government and the BC government both failed to do an independent review of the project prior to commencing. https://lailayuile.com/2016/02/08/muskrat-falls-fiasco-provides-example-for-british-columbians-of-potential-future-of-site-c-why-premier-clark-must-send-project-to-bc-utilities-commission-independent-review/

Newfoundland officials were forced to call for an independent review into Muskrat Falls months ago, after costs spiraled and delays plagued the project, one that like Site C, had been pushed ahead despite overwhelming opposition and protests of taxpayers and First Nations.

Today, Muskrat Falls is trending on twitter and there is no joy for the many people who, like the thousands of British Columbians, have opposed the project and begged the province to stop.

“And costs were underestimated. Overruns have come.

And Islanders think our power rate increases are a bit high. This is thanks to the Muskrat Falls project. pic.twitter.com/ElZJvsyehT

When first announced in 2010, Muskrat Falls was presented as a $5-billion project. The estimated cost now stands at $9.1 billion. That rises again to $11.4 billion when interest is included.

Marshall called the project a “boondoggle” and said it never should have been sanctioned. But he added it’s too late to turn back. Marshall said he did not have an exact cost estimate for stopping the project, but insisted it was not feasible to cancel all the contracts.

Nalcor expects the cost to consumers will be 21 cents a kilowatt/hour in 2021, which could be the highest rate in Canada. But Marshall pledged he would do everything he can in the next four years to mitigate that impact.

This is, without a doubt, the future of Site C, because like Newfoundland, there has been no independent review of the financial plans, the estimates, the cost etc. We have the process  here to do that- I’ve written about this extensively and the WAC Bennett Dam repairs just underwent such a review to protect taxpayers.

And sadly, Premier Clark,Minister Bill Bennett and even Board of Trade president Ian Black of have all been given large platforms to tell the public how great Site C is and how much due diligence has been done through the Joint Review Panel.

It’s a lie, because the Joint Review Panel was not and could not review the financial aspect of the plans and recommended it be sent to the BC Utilities Commission because they could not see a need for this energy! Rarely has any reporter challenged their statements. The only time I’ve seen it done- and not widely seen across the province- was with Jonny Wakefield who asked Clark about Muskrat falls in this Q &A: http://www.alaskahighwaynews.ca/regional-news/q-a-premier-christy-clark-1.2242019

AHN: How closely you’re watching the Muskrat Falls project in Labrador? It seems every couple weeks you hear something that’s gotten more complicated, or there’s another cost overrun there. How does B.C. keep from falling into a similar situation?

CC: The same reason we have a balanced budget and they don’t, and the same reason we have the fastest economic growth in the country and they don’t. We really watch our Ps and Qs, (and are) very careful about those financials. Important though to remember too—BC Hydro spent 10 years planning this project. This isn’t a back of the envelope project. That’s meant they have worked through almost every scenario and tried to risk-manage that. So it’s really minimized any of the risk that they have. That kind of extra work and the time that they took to do it is really paying off now. I don’t know very much of the background to Muskrat Falls, but I do know that in British Columbia we have proven ourselves and the country to be the leaders in managing the province’s finances well and that includes BC Hydro.

Guess what? That’s what the premier of Newfoundland and the former CEO of Nalcor said too…. and yet… they are now scrambling as the truth comes out.

I would hope that this kind of critical concern and examination appears on the front page of papers across BC. I would sure like to see Clark and Bennett get asked directly about the exemption of the only independent financial review that could save taxpayers from a disaster like Muskrat Falls-that these concerns are not being examined is alarming-this is the time for a full stop. And those in the Liberal caucus who bill themselves as fiscal conservatives would do well to break rank on this one because silence now will have big implications later- hard to pass yourself off as fiscally conservative when you’re on board with building a project that isn’t needed. Bennett’s decision to retire now is a good one- he knows full well whats coming down the pipe on this project,he’s said it himself. 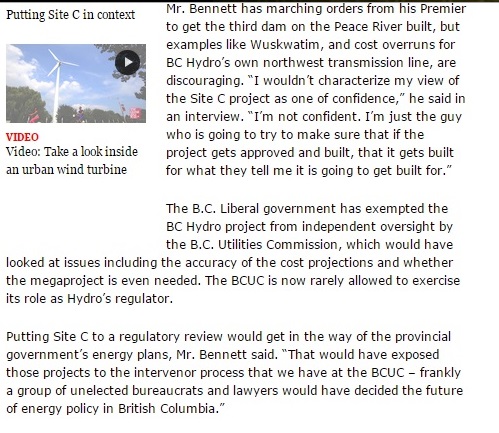 Thankfully, unlike Muskrat Falls, which has the dam structure and power plant well underway, Site C is not too late to be cancelled, or halted to allow a financial review by the BCUC now, to prevent making headlines for an even bigger boondoggle later on. It’s never too late to admit a mistake.
Time to put the ego’s aside in government, and put the financial security of the province first. I urge all of you to contact your MLA’s with this story. Write letters to the editor. Ask hard questions. Because you will be bearing the burden if this continues. As Harry Swain, chair of the Joint Review Panel stated again recently:” I think we are making a big mistake, a very expensive one…”

44 thoughts on “Shocking admission from Nalcor Energy CEO serves as chilling warning to BC Government that exempted Site C project from independent review of BCUC.”